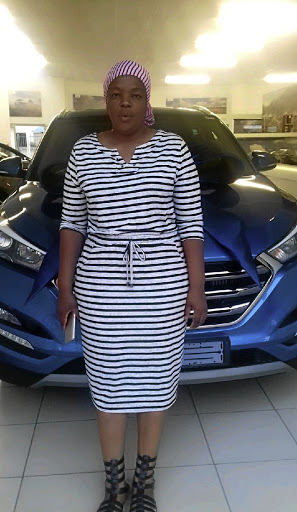 Connie Mmola's car was wrecked when she took it in for a service. / Supplied

When Connie Mmola took in her car for its first service she never thought she would have to deal with attorneys and the media to get it back in the condition in which she took it in.

Mmola, 40, of Lenyenye in Tzaneen, said her car had clocked 30000km and was due for its first service when she took it in to Hyundai Magic Motors on February 26.

The mother of four said the dealer phoned, later that day, to tell her that her car was involved in a minor accident and he wanted to take it for repairs.

She insisted on seeing the damage before she could approve the repairs, Mmola said.

To her shock, she discovered that it was a huge damage and they could not explain how it happened and had no police report to support their story.

"I insisted on getting it back without panelbeating stories and Madelein Venter promised to get a replacement and even said that I might need to top up with some few thousands on a brand new car," Mmola said.

She said she had not budgeted for a top-up or trade-in as she brought the car for a service "which I will enjoy until the car clocks 100000km".

To assist in getting a replacement car, Mmola called the dealer where she had bought her car in Groblersdal, Limpopo, and was told they had a demo for R429000, different colour but same features as her damaged car.

Wheels come off in deal a car was used as collateral

Warning: vehicles may not be loaned for cash.
Opinion
3 years ago

"I then called Madelein to inform her about the car in Groblersdal."

Venter found that acceptable and told her that she would have to top-up and pay the difference because the value of her car had dropped from R457000 to R320000.

She said Venter was "rude and arrogant" when she tried to have a decent conversation to resolve her problem.

"I told her that should she continue with that behaviour I will lose my temper and do something that both of us would regret," Mmola said.

Venter also threatened to throw her out of their premises with the help of the police.

"At this stage, my husband advised me to allow Venter to repair the car at a panelbeater of my choice," Mmola said.

Mmola said they left the car in their possession and they took it to a panelbeater who performed shoddy workmanship.

On calling her preferred panelbeater, TransLetaba, she was told the repairs were not done as per the quote since Venter disapproved of it, she said.

A quotation from TransLetaba showed that her vehicle suffered major structural damage, and had to be taken to a Hyundai dealer in Polokwane or Groblersdal to check if the engine or mechanical parts were affected.

Venter acknowledged that Mmola's vehicle was damaged while in their possession for a service.

She said there was never an undertaking on their part to replace Mmola's vehicle for a new one.

Venter said after discussing Mmola's complaint following Consumer Line's intervention, they have decided to follow the idea to use Mmola's preferred and approved panelbeater, TransLetaba.

"We contacted the assessor and asked him to arrange an urgent meeting with the customer and conduct a final assessment with her," Venter said.

"However, if the complaints are regarding matters that are not accident-related, we will not be able to get involved."