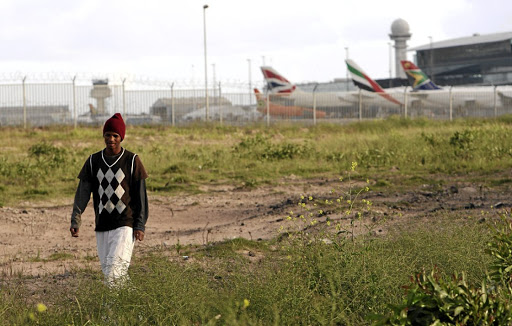 The renaming of Cape Town International Airport has caused a furore, with the writer suggesting that although EFF is a smaller party, it seems to be setting the political agenda. /ESA ALEXANDER

A gigantic political storm has erupted in the Western Cape. On the face of it, the storm comes across as if it is innocently about renaming a mere airport.

Politically bankrupt as the ANC has become, the party quickly heeded Malema's call, just as it unthinkingly jumped onto the EFF's bandwagon of land expropriation without compensation.

As a party that got 6% in the last national elections, the EFF must be proud of its ability to punch above its weight. We can say without doubt that today the EFF is the intellectual leader of the ANC. The only problem is that most of the EFF's ideas are downright anarchic.

The party is not interested in building; it is a demolition brigade - with the mentality of a madman holding a hammer, who smashes every problem like a nail - quickly, and very hard!

The tragedy of a governing party that has stopped thinking is that it follows every wind that blows, regardless of where it is going. Poor Cyril Ramaphosa must now spread EFF propaganda that land shall be expropriated without compensation, legally - whatever that means.

While we were trying to recover from the directionless debate on land expropriation, the EFF has given the ANC another bone to lick - Winnie Mandela International Airport.

Nathi Mthethwa, our intellectually hollow minister of culture, is now running fast with the EFF's bone. He is licking it as if there is no tomorrow - and Malema is laughing.

A public meeting on the renaming of Cape Town International Airport descended into chaos.
News
3 years ago

It is obvious that the public consultations about renaming Cape Town airport are a sham. As a former member of the ANC Youth League and the South African Students Congress myself, I know and am proud of the role played by Mama Winnie. But to use her name to divide South Africans is politically reckless.

SA is a very sensitive socio-political tapestry. Nothing is more profound than the Freedom Charter: South Africa belongs to all who live in it. It is good that KwaZulu-Natal has an airport named after Shaka Zulu. Imagine if the EFF were to suggest that Shaka International Airport be renamed Sekhukhune International Airport. Zulus would be justified to send Malema to a lunatic asylum.

We all know that the majority of people who live in the Western Cape are coloured. Why does anyone think they don't deserve to celebrate their heritage through an airport located in the heartland of their history?

It follows, therefore, that the people who must have a greater say in renaming Cape Town International Airport are not those from Sekhukhuneland. It must be coloureds on whose soil the airport stands.

The point is not ethnically to balkanise South Africa; it is to acknowledge all the tributaries that have poured into the great river of South Africa's national identity.

Jan Smuts was right to assert that a whole is greater than the sum total of its parts. However, the composite nature of SA's national character is what makes ours stand out in the community of nations. Human societies are not wet clay in the hands of fanciful social engineers.

If you overbend them, they break.

As an infantile Marxist party, it is understandable why EFF apparatchiks believe they can remake our society as if coloureds are mere clay in their hands. Karl Marx used to daydream that national consciousness is false consciousness. In the end, human nature has outlived Marx's ideological hallucinations.

The most haunting question for all patriots is: Now that EFF adventurism has taken over the mind of the ANC, who will unite South Africa?

Airport renaming: We won't be influenced by the loudest voices‚ says Acsa

Acsa said on Tuesday that the renaming process of Cape Town International Airport was on track.
News
3 years ago
Next Article