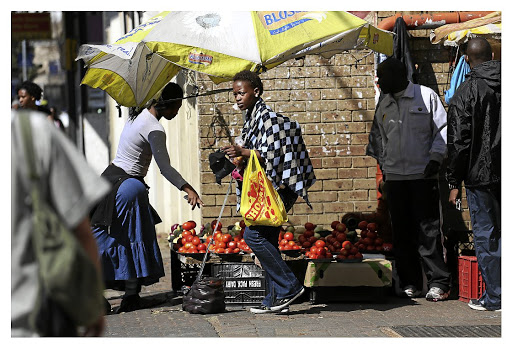 The informal traders association believes the bill's proposed ban on the display of cigarettes, as well as a ban on the sale of loose cigarettes, will have a negative impact on members. /ALON SKUY

With an estimated 2.2-million hardworking table top traders, hawkers, spaza shop owners and home-based operators across all nine provinces, there can be little doubt of the importance of the informal trade in South Africa.

They continue to provide the jobs that President Cyril Ramaphosa, with the support of the minister of small business development, has prioritised; the jobs that the formal sector seems unable to deliver.

There are no banks to give loans, no insurance if stock is stolen, and no paid holiday and health benefits.

These are people who instead of waiting for help, have taken their destinies into their own hands and are going out to battle for their families' wellbeing.

Sadly, while the president and the minister of small business have recognised the importance of this sector, the publishing of the Control of Tobacco Products and Electronic Delivery Systems Bill by the Department of Health on May 9 undermines the government's support for the informal sector.

Nomaswazi Luvhengo is trapped in a hellhole of nyaope addiction.
News
4 years ago

South African Informal Traders Association (Saita), which represents thousands of informal traders across the country, believes the bill's proposed ban on the display of cigarettes, as well as a ban on the sale of single cigarettes, will have a negative impact on members' trade.

Last week, just before the bill was published, Saita met with the Department of Monitoring and Evaluation to discuss our concerns.

The Department of Health was present, and it was clear that the bill has been developed without any regard for the realities of the informal trade.

In a bid to minimise the negative impact on our sector, we are calling for an exemption from the bill for the informal trade.

There are three provisions in the bill that will have a devastating impact on informal traders:

This won't work as we don't have the infrastructure of the formal sector. We simply don't have anywhere to hide the products like storerooms.

Furthermore, the health minister seems to think by hiding cigarettes, people will stop smoking. If smokers want a cigarette, they will go find a cigarette.

In addition, it is profoundly unrealistic and senseless that traders who display their legal wares could face a five-year prison sentence.

The government would do well to remember who the real criminals are.

During the meeting with the department, they confirmed they will be banning the sale of single cigarettes.

Take a tour of any taxi rank around the county and you will see that these (loose cigarettes) are the backbone of the informal trade. Traders feed their families and send their children to school from the sale of these products.

Cigarette company could be in trouble over event sponsorship

A Pietermaritzburg-based cigarette company could find itself in hot water for allegedly transgressing the tobacco control laws by sponsoring ...
News
4 years ago

Requiring all cigarettes to be sold in the same dull packaging, with all branding removed, will drive the illicit trade, increasing accessibility for the youth, which is the exact opposite of what the bill hopes to do.

The Department of Health says they will address illicit (trade) by having identifying codes on cigarette packs that will be scanned at points of sale. However, the informal trade won't be able to use scanners as they don't have the facilities, electricity points or space for them, and many of the traders are roving vendors.

While Saita supports the minister's objective to stop people from smoking, especially the youth, the solution isn't to hide these products but to educate the nation on the dangers of smoking.

There are always alternatives ways when approaching what is conceived to be a problem, in this case smoking.

We are calling on all small and micro businesses to support our call to the department to exempt us from the bill and to allow informal traders to voice their concerns and objections to the department.