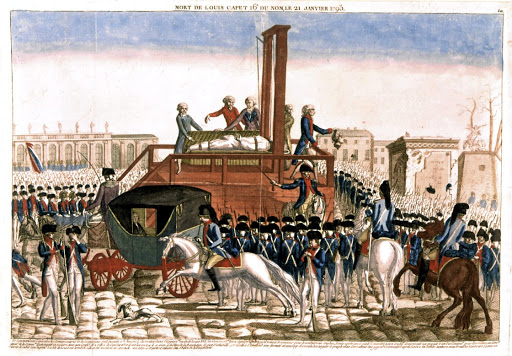 The execution of the last French monarch Louis XVI, in 1793. The writer says rule by birthright is an outdated form of government which has over the years held humankind back. /UIG/Getty Images

Is it not better to be ruled by an idiot you have elected than by one you had no hand in installing?

Such is the question raised by the disconcerting state of the institution of traditional leadership in South Africa today. Kings and chiefs in our country are generally treated with a sensitivity not dissimilar to that accorded to religion. Yet none of these men has ever been coronated by a deity.

This undue elevation of mere mortals to a kind of spiritual position is in fact a product of history, a deliberately constructed history of dominance by the strong over the weak.

Karl Marx was right to paint a picture of modern man as a victim of a history that weighs heavily like a nightmare upon him.

In the beginning, the men who imposed themselves upon others as kings were almost always physically the strongest, or they were the most adept at the use of crude weapons.

Don't let our future drown in the mindless alcoholism of today

What will become of us if we do nothing about the gay abandon with which people, especially the youth, drink
Opinion
3 years ago

To perpetuate the dominance of their bloodlines, the "original" kings decreed it that humankind shall thenceforth be ruled by sons connected to the first despots. Thus, the yoke of traditional leadership was imposed upon the shoulders of posterity with an authority that uses the passage of time to conceal its fabricated naturality.

The discovery of reason as a brighter torch to illumine humanity's path to the future exposed the instrumentalisation of religion by kings who sought self-servingly to cement their rule over humankind.

Thus, the French Revolution came to embody the assertion of free will as the only legitimate director of human affairs.

We refer to the European experience to underscore the oft-distorted fact that there is nothing uniquely African about the institution of traditional leadership.

From the Hobbesian state of nature, all peoples of the world have at some point passed through the tyranny of kings.

In defence of their self-interests, kings and chiefs in SA today are quick to dismiss criticism of their institution as an attack on African culture and traditions, as if chieftaincy was invented in Africa.

Our chiefs are not the first in the world to use culture to blackmail their so-called "subjects".

The real meaning of Freedom Day unpacked ... and beyond propaganda

For political expediency, a deal was struck during the transition to democracy to create an ill-defined space in our new constitutional order for the perpetuation of an undemocratic and anachronistic system of governance called "traditional leadership".

This enmeshing of democracy and despotism was done in the name of conserving African culture. Chiefs do occasionally wrap themselves with animal skins, but all of them don't sleep in African huts - they prefer mansions and a Mercedes-Benz or BMW.

And there are chiefs who are known drunks.

The call to nationalise land without compensation has not only scared white people; chiefs too are trembling in their boots. It is often said that land in rural communities belongs to the people, but chiefs lease out, or even sell, land without giving anything to "the people".

In most parts of rural SA, the institution of traditional leadership has degenerated into a sordid system of bribe collection, presided over by generally illiterate idiots called chiefs.

The arbitrariness and absolute power of the system enables venality to go unpunished.

It may be true that our kings and chiefs are not more corrupt than politicians but politicians exercise power in a defined constitutional space that is within reach for us ordinary citizens.

If they are unhappy, citizens can remove a corrupt politician from office at an election. A chief can collect bribes in broad daylight and subjects can do nothing about it. Primogeniture protects princely thieves.

The original question confronts us: Is it not better to be ruled by an idiot you have elected than by one you had no hand in installing? Think about it.