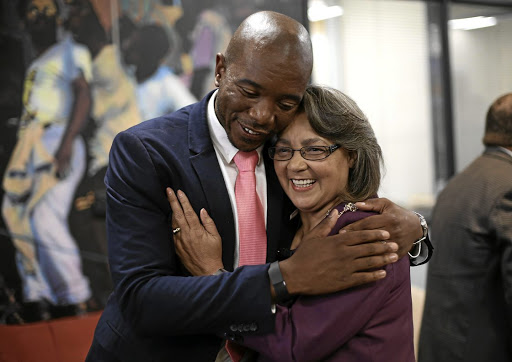 The DA finally got its wish when this week the party's federal executive found technical grounds in its constitution to boot out Patricia de Lille.

Party leaders and members of the DA caucus in the City of Cape Town may be breathing a sigh of relief, but De Lille's ousting does not help the DA's reputation and image.

Although the party boasts that its national leader is black and that eight out of its nine provincial leaders are black, what matters more is how they are treated or are perceived to be treated.

It has become the DA's mantra to assert that it is important to move beyond race and to focus on equal opportunity for all. In justifying the disgruntlement of some members of the party following DA leader Mmusi Maimane's remarks about the persistence of racial inequality, other party leaders maintained that the reactions were part of a culture of robust debate in the party.

The argument does not fly when reports have it that those white members who took issue with Maimane's remarks about white privilege and black poverty feared his expression of facts would alienate white supporters.

This is very reminiscent of the backlash that former leader of the party in parliament, Lindiwe Mazibuko, faced for her contrary stance on racial quotas which led her caucus to vote in favour of B-BBEE in 2013.

It boils down to the tendency within the DA to argue for a colour-blind society. This is to say that 1994 marked the end of racial inequality in society and thus to point out inequality is anti-reconciliation and inimical to nation-building and the nurturing of social cohesion.

However this approach is naive and denies that the present social and economic inequalities in South African society, which are also racialised, are a product of a long history of segregation and institutionalised racism that privileged whites.

The DA has also mastered the art of speaking with a forked tongue on the issue of transformation. Beyond the apologists for colonialism like Helen Zille, leaders such as Athol Trollip have very readily spoken out about the reality of white privilege and how it has shaped race relations in South Africa.

But he and others like him are very quick to add the disclaimer that although redress for black people is important, it should not be to the disadvantage of other racial groups. This is an impossible ask. To get to an equal opportunity society will require redistribution.

It is within this broader debate on redress and transformation and how to achieve a nonracial society that the De Lille debacle should be located.

Although the party federal executive claims that the fallout between De Lille and the party is on account of her alleged corruption and incompetence, there is no running away from what De Lille represents. She comes with a background in Pan Africanist and Black Consciousness politics.

Suffice to say that her approach to questions of redress and analysis of racial inequality would alarm members of her own caucus.

Throughout attempts to oust her, she has maintained that it is her opposition to property developers who opposed the building of low-cost housing in the city that drew the ire of the party.

Unlike embattled North West premier Supra Mahumapelo, De Lille is not facing protests and calls for her to step down by residents.

She faced pressure from within her own party.

De Lille's ousting does very little to rebut the perception that the DA is a party that is preoccupied with defending white interests. The DA has shot itself in the foot.