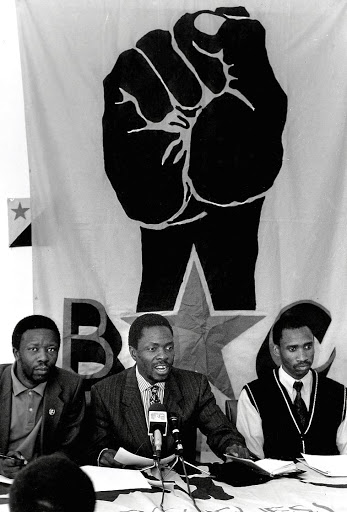 Black Consciousness exponents Strike Thokwane, Lybon Mabasa and John Modikwe during Azapo's heyday. Many people did not know it was the party's 40th birthday at the weekend. /Robbie Botha

While some people were happy to celebrate the 40th birthday of the Azanian People's Organisation (Azapo) last weekend, were it not for some chance comments on social media, this momentous occasion would have gone unnoticed by many.

Put more directly, when someone wished Azapo well on its 40th birthday, many asked: Oh, so is Azapo still alive? Younger members of the public wondered aloud: What was Azapo in the first place?

These are valid questions, for the simple reason that Azapo has been absent from the public domain, conceding the stage to everyone, ranging from the EFF to AfriForum. A great pity.

When it was formed in 1978, Azapo undertook to continue the work that had been started by Steve Biko and his comrades in mobilising black people to take their destiny into their own hands, rather than relying on some saviours from Robben Island or exile.

Stripped to its barest essentials, the Black Consciousness philosophy that Biko lived and died for is about self-knowledge, which in turn engenders self-pride whose by-product is a zeal for self-reliance.

While Biko could play the game of politics with the best of them, he always went back to the basics - if conscious of who they are, black people could do anything to self-sustain. If they as a community are self-sustainable, they became a threat to the status quo that relied on cheap black labour.

Biko's detractors laughed when he went around teaching people about planting their own vegetables, setting up clinics, bursary schemes and other self-help projects. To these critics, this was not revolutionary work. Revolutionary work was planting bombs and burning things down.

The Azanian People’s Organisation (Azapo) announced the death on Sunday of its former president and “a stalwart of the Black Consciousness Movement”‚ ...
News
5 years ago

Because it was run by smart men, the apartheid government recognised the potency of Biko's work. The regime killed Biko in prison in September 1977. The following month, they banned all organisations associated with Black Consciousness. These developments rekindled the flames that engulfed the country in June 1976.

It was into this blistering inferno that some of Biko's associates plunged themselves, forming Azapo in 1978. The organisation undertook to be the custodian of Black Consciousness.

From the onset, Azapo activists were known for their fearlessness, outspokeness and the profundity of their thoughts and ideas towards workable solutions - no matter the problem at hand.

I think the death knell for Azapo as we'd come to know it was the period during which the dominant ANC, after a series of behind-the-scenes talks with the ruling National Party, finally settled for a negotiated end to apartheid.

Arguing that the ANC had the black community down the river, many in Azapo decided to boycott the talks and the subsequent elections. But some members started engaging with the ANC, sparking a series of in-house wars. These fights led to the disintegration of the Black Consciousness Movement into many entities, all claiming Biko's mantle - Azapo and the Socialist Party of Azania among them.

Because Azapo membership had been small to start with, when it disintegrated into even smaller factions, the whole thing became so sad that the media derisively referred to these as "one person, one fax machine", a parody of Azapo's slogan: "One Azania, One Nation".

The delicious irony is that much as Azapo is absent in the public domain, there has been an upsurge of something called Black Consciousness, especially at universities. It presents itself to the public in the form of youngsters with big Afros, wearing T-shirts that bear such slogans as: "F%*&^ White People".

Those who grew up on the noble thoughts of Onkgopotse Tiro, Strini Moodley, Biko and his intellectual mentor Frantz Fanon will tell you - that is not Black Consciousness. Maybe in its 40th year Azapo will emerge from hiding and do the real work of putting Black Consciousness into its proper perspective.