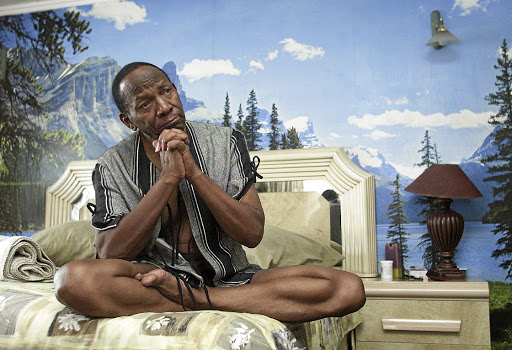 A play currently on at the Market Theatre brings Gibson Kente's commentary on political goings-on in SA into sharp focus. The father of black theatre died in 2004 of HIV/Aids-related illness. /Elizabeth Sejake

Friends and neighbours, I want to tell you this morning that despite the emotional challenge of having lost Winnie Madikizela-Mandela and former social development minister Zola Skweyiya in such quick succession, I am together.

In the face of political shenanigans unfolding in KwaZulu-Natal, and the befuddling goings-on at the Gupta Palace in Saxonwold, Johannesburg, I am together.

What is this "togetherness" business this man is going on about, some of you are probably asking. It's a quirky phrase coined in the late 1980s by theatre maestro Gibson Kente, who came back to life for some of us when The Gibson Kente Music Tribute opened at the Market Theatre in Johannesburg this week.

On the face of it, this is a simple homage to the doyen of South African theatre, but at another level it can be seen as a powerful political statement, albeit from an artistic brain, about the state of affairs in this country.

Nosipho Dumisane is a young female director whose debut film, Nommer 37, has made history. It was the first South African feature film at the South ...
Lifestyle
4 years ago

Taking the form of a medley of some of Kente's memorable plays, including Sikalo, Can You Take It? and How Long? the tribute, ever so subtly, brings the legendary playwright's commentary on political goings-on in South Africa into sharp relief.

To those who followed and enjoyed Kente's work over the years, this tribute is a breathlessly intense nostalgic moment of recognition, as in: "aha, Bra Gib predicted all these things!" To the young audience who might not have been born when Kente toured the country with his cast, the works sound as if the man has just penned them now.

Commentary, of course, done entertainingly in Kente-style music and dance, is on the social ills still prevalent in the country - government corruption, women abuse, crime and, of course, the legacy of the migrant labour system.

Not for nothing has Kente been called The Prophet of the Theatrical World. Through his 1974 play, I Believe, he foretold the student uprising that would shake the country two years later.

In that play, Zwelitsha (played then by Peter Sephuma) was a student who kept having run-ins with a security cop, played by Darlington Michaels. The climax of the play saw Zwelitsha having a vivid vision of the 1976 uprising in all its gory detail!

It is against this background that one is simply blown over by this tribute, coming as it does at a time when our country is being buffeted by so many uncomfortable storms of a political nature.

I want to draw some parallels here: on the one hand Madikizela-Mandela was pilloried for raising such uncomfortable questions as to why the black child is still starving in a post-apartheid SA while the political bigwigs are swimming in gravy; about why black people have to apologise for the past, when in fact they were victims of white oppression in that past.

Masego gets into swing of local things

When I first encounter TrapHouseJazz pioneer Masego, he is full of effervescent energy and impeccable style.
Entertainment
4 years ago

On the other, Kente was attacked by "the comrades" when he staged his play Sekunjalo, which foresaw corruption in the upcoming new black dispensation.

If Sekunjalo were to be performed today, it would sound boring because it deals with our reality today; except that that reality was foretold back in 1987.

On my way to the theatre, I'd been worried as to how the producers of this tribute would pull together the rich oeuvre of Kente into a single production. That's 40 years of hard-hitting work.

But director Makhaola Ndebele rose to the challenge. He inscribed his own signature without erasing that of the man who gave us such thespians as Sello Maake kaNcube, Patrick Shai, Mbongeni Ngema, and such musicians as Brenda Fassie and Margaret Mcingana.

It's an entertaining piece of work which will take you topies down memory lane.