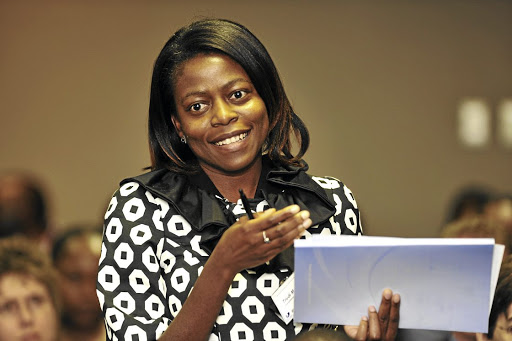 The appointment of economist Trudi Makhaya as President Cyril Ramaphosa's economic advisor marks a break with tradition in a number of positive ways.

Firstly it smashes the glass ceiling as far as economic policy formulation - for years an almost exclusive domain of males - is concerned as Makhaya is the first black woman to hold the position.

The appointment is not merely symbolic, she is likely to bring to the job new dimensions that were largely neglected by her male predecessors. However, the symbolism is also important as the move sends out a positive message to young women - especially from disadvantaged backgrounds such as that of Hammanskraal-raised Makhaya - that policy-making and economics are not a preserve of men.

Her appointment to the post also breaks with the tradition in the sense that she is not drawn from within the ranks of the governing ANC. She is also not known as a left-leaning economist who favours heavy state interference in the economy. She is widely seen as a mainstream economist with conventional views on how to stimulate economic growth and development.

Cyril Ramaphosa has this week appointed the youngest economic adviser in the history of the highest office in the land.
Business
4 years ago

In this sense, Ramaphosa's choice for an advisor is interesting. It signals that, despite much talk of "radical economic transformation" within the ranks of the ruling party, the Presidency's approach is not about to "jump to the left". It would remain fairly centrist.

Whether this approach would not put Ramaphosa at odds with an ANC that is increasingly sounding militant on economic redistribution issues remains to be seen.

What is clear though, is that after almost a decade of economic policy confusion under Jacob Zuma, Ramaphosa is giving the country a clear indication of which direction his government will take.

Centrist as Makhaya may be, she is clearly not oblivious to the transformation imperative that confronts the Ramaphosa. Accelerating economic growth rate would mean little for the president's track record if that turn-around is not coupled by making the economy more inclusive.

In her writings, Makhaya has argued for a capitalism on the continent with unique Africa characteristics. Her appointment provides her with an ideal opportunity to channel government along this route.