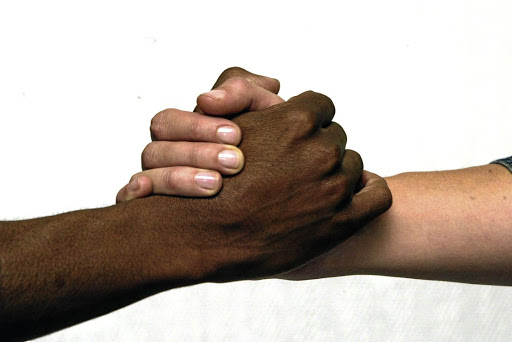 Instead of being brought together by Archbishop Desmond Tutu's hopeful dream of a Rainbow Nation, South African blacks and whites seem even more divided than ever, says the writer.

In May 1998, during a debate in the National Assembly on national reconciliation and nation building, the then deputy president of the republic, Thabo Mbeki, delivered a speech which caused ripples of excitement, not only locally but also abroad, for it imploded, in the minds of many, the Rainbow Nation myth.

"However, I believe that perhaps we should answer this question honestly and deal with the consequences of an honest response, however discomfiting it may be. Accordingly, our answer to the question... would be, no."

Attention-grabbing news events over the past few days contrived to bring to mind this Mbeki address, in which he further spoke of South Africa as a country of two nations - one white and rich, the other black and poor.

Let's start with what happened last week. A white woman called Vicki Momberg was sentenced to two years in prison for repeatedly referring to black people using the K-word.

Momberg jailed for her words ... and then her lack of them

When Vicki Momberg goes to sleep tonight‚ behind the bars of a Johannesburg prison.
News
4 years ago

Her prison conviction for crimen injuria is a first. Generally, this offence carries a sentence of a fine, community service and a suspended sentence.

The sentencing was hailed by many as a breakthrough, that it would send a message to the populace that racist rants will not be tolerated as they are unlawful and unconstitutional.

But, some critics jibed that the Momberg incident was indicative of the fact that while ordinary black people went out of their way to be conciliatory, their white compatriots were unrepentant. This, in turn, showed the Rainbow Nation concept for what it is: a myth.

Two days later, real estate mogul Pam Golding died. It was the black people's turn to be hateful and racially offensive. How depressing and heartbreaking to wade through the hateful, racist sludge on social media.

Again, somebody remarked: "See? I told you, the Rainbow Nation is a useless myth."

Not that I am an advocate of it, but I've always argued that as human beings we need myths. I think when Archbishop Desmond Tutu coined the phrase he meant it as something that should steer us towards dreaming big. In other words, a myth should not be an end in itself but should be the fuel that drives us towards an end.

To be a bit controversial, religion is a collection of many myths. Religion speaks to us in parables, riddles, epic tales and poems, all in a bid to make us better and responsible human beings: don't steal, don't kill, don't be greedy.

Like religion, the Rainbow Nation myth, therefore, is an expression of hope that we can be a better nation.

We cannot rest on our laurels now. The various cases cited above show that we still have a lot of work to do to fulfil the dream of an egalitarian, nonracial or anti-racist society as envisioned in various South African manifestoes ranging from the Freedom Charter of the ANC to the Azanian Manifesto of the Black Consciousness tradition.

If you can't be inspired, and when you stop dreaming, you are dead. But, if you celebrate your dreams endlessly and refuse to turn them into reality, you are a hopeless case.

Four lawyers down‚ a damning psychologist report‚ a dismal assessment by a probation officer and a character witness who painted her as a “lunatic” ...
News
4 years ago

Vicki Momberg has been sentenced to three years in prison for using the k-word.
News
4 years ago

Vicki Momberg must begin serving an effective two years’ imprisonment after being denied bail pending an application for leave to appeal.
News
4 years ago

Constable David Mkhondo‚ the police officer who was racially abused by Vicki Momberg‚ hopes the prison term she was served will send a strong message ...
News
4 years ago

Convicted racist Vicki Momberg has not yet filed an answering affidavit in the contempt of court application.
News
4 years ago

Vicki Momberg has arrived in court after spending the past week in jail - and she's sporting cornrows.
News
4 years ago
Next Article