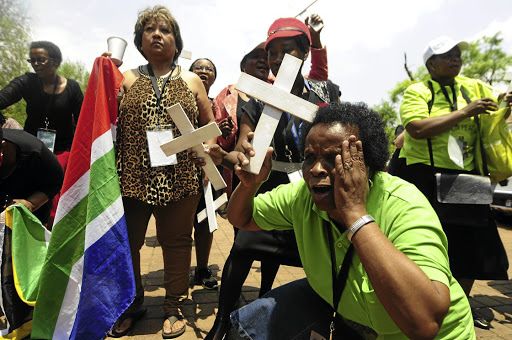 Family members of dead Esidimeni patients protest outside the venue of the hearings in Parktown. The writer says the ANC must punish government workers involved in causing the tragedy. /Thulani Mbele

We all have to hang our heads in shame.

As a country, what happened to the Life Esidimeni psychiatric patients indicates a dire lack of care from our government officials.

Yesterday, retired deputy chief justice Dikgang Moseneke delivered his findings on the Life Esidimeni patients following the deaths of 144 of them while some are still unaccounted for.

They died in the hands of a democratic government supposedly premised on a culture of human rights after they were moved from a private healthcare facility, Life Esidimeni, to inexperienced nongovernmental organisations (NGOs), some of whom were not even properly registered.

Moseneke's findings may have provided closure to the families failed by the system, but there are still unanswered questions around the entire sorry saga.

Former Gauteng health MEC Qedani Mahlangu has to tell the nation why the decision to move the patients was so important that it had to be carried out at any cost.

That cost came in the form of human life.

Her answers will be important because Moseneke exposed how sound laws and regulatory frameworks were not followed when the patients were moved.

More than half the amount was spent on the Emoyeni Conference Centre as the venue for the hearings‚ which cost R8.4-million.
News
4 years ago

It is clear that the reasons advanced by Mahlangu, former department head Dr Barney Selebano, and the former director of mental health, Dr Makgabo Manamela, for terminating the contract with Life Esidimeni to save costs, were not true.

Moseneke said the patients were sent by Mahlangu, Selebano and Manamela to a place of torture and death.

That is why today we have 144 deaths that happened under the watch of NGOs that did not have the training nor the experience to look after the patients.

Their suffering, according to Moseneke, started the very minute they were transported to these inadequate NGOs.

They were shunted from one place to another in a cruel, inhumane, and deeply degrading manner.

They were simply being sent to their deaths.

There are calls for the government to shame and jail those who were involved in the decision-making and implementation of the barbaric decision. The state simply cannot allow anyone, more so government workers, to trample on human rights and dignity.

Mahlangu and her officials have a case to answer as to why they made the decision without informing the families of the patients.

They were supposed to have been given a chance to inspect the facilities where their family members were going to stay.

But Mahlangu and her senior officials, some of whom are medical practitioners, threw the patients into a lion's den.

Life Esidimeni had psychiatric facilities to look after the patients and the company had been doing the job for years for families who find it too stressful to look after people with mental health issues.

The question is, why did Mahlangu and her officials rush to fix what was not broken in the first place?

Who benefitted from the transaction when these patients were being moved to those ill-prepared NGOs?

Mahlangu and her team claimed that they transferred them in order to save costs.

The medical practitioners that were involved in making the decision should never be allowed to practise in the health field again.

The governing party has to punish those who were involved.

Otherwise the people will never forgive the ANC that has promised human rights for all.