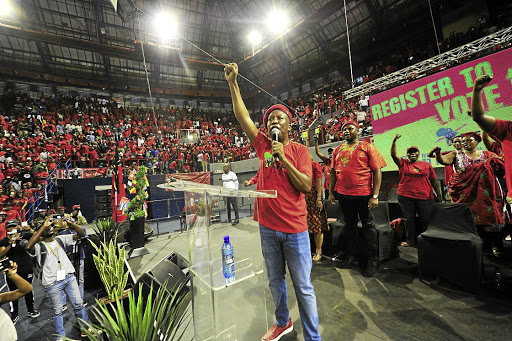 Julius Malema once told us he would be president of South Africa.

Launching his party's registration campaign last week, he revealed what kind of president he would be.

The day was about encouraging EFF supporters and all other eligible South African voters to register or verify their registration.

Instead of focusing on registration, Malema turned the whole thing into an opportunity to threaten and insult all manner of supposed enemies - from Mozambican-born Duduzane Zuma to white people and analysts.

It is obvious that Malema styles himself along the lines of orators who can speak for hours without a script - a la Fidel Castro, Hugo Chavez, Robert Mugabe and so on.

If Malema had read Marcus Tullius Cicero's book, How To Win An Argument, he would have long noticed that what distinguished an orator like Castro was the depth of his knowledge.

An acclaimed orator himself, Cicero has an important lesson for Malema: "I believe that no one can become a truly great orator unless he has a solid foundation in the whole range of human knowledge."

He may not possess a whole range of human knowledge, but the soundness of Floyd Shivambu's arguments whenever he pontificates in parliament always stands out.

Judging him by the EFF's own standards, Malema stands a shoulder below those around him.

Ramaphosa and Mabuza to Malema: ‘Come back home’

President Cyril Ramaphosa and Deputy President David Mabuza on Sunday extended an olive branch to EFF leader Julius Malema and others‚ urging them to ...
News
4 years ago

Watching him on stage last week, intelligent observers were left with the impression of a rumbling rabble-rouser who is vocally gifted and mentally destitute.

Malema clearly relishes his theatrics, but he leaves us wondering what would happen to South Africa if such a monstrous menace were to befall our country in the form of a president.

The problem with toy revolutionaries is that, because they have big role models, they often don't realise when spectators laugh at the grotesquerie of a dwarf's feet struggling to lift big shoes.

When a serious orator climbs the stage, he brings a central message to his hearers. You do remember an insult or two delivered by Malema last week, but what exactly was the central message of his speech?

If Malema wants to learn from a twisted mind, he must read Joseph Goebbels's speech on Knowledge and Propaganda. There he will come face to face with an obnoxious mind at its best.

Beyond propaganda, politics is a serious business.

In other words, serious politics ought to be about the search for a better model to organise human society, to find a social framework for the greatest happiness of the greatest number of people.

If Malema had deviated from the theme of the day - registration - to tell us how he plans to transform South Africa's economy to ensure greater efficiency, deepen social justice and make you and I freer, it would be understandable. Instead, he howled gigantic curses about Mozambique and white people who must go to hell.

How will all this make our lives better?

Imagine a state of the nation address delivered by "president" Malema one day, wearing a red beret and insulting analysts for pointing out that, unlike what he preaches, he lives in an expensive suburb.

It is true that EFF leaders wear overalls in front of cameras in parliament and change to Italian suits at night when they drink Scotch whisky.

All of them - from Shivambu to Malema - drive expensive cars and they don't live in a township. Yet they masquerade as tribunes of the poor. It is all showmanship!

Maybe it does not matter where Malema lives, but he has no right to abuse the public under the pretext of encouraging people to register. If he wants to clown, he must go to a circus. If he wants to be a comedian, he must approach Trevor Noah for proper training.

As responsible citizens, we must set the bar very high; we must not clap hands and laugh when someone in leadership abuses his position.

Dear Mr Julius Malema: Young leaders with presidential ambitions, a la Barack Obama in his youth, spend time immersing their minds in knowledge, instead of mastering the art of insults. You are young, you can still learn.