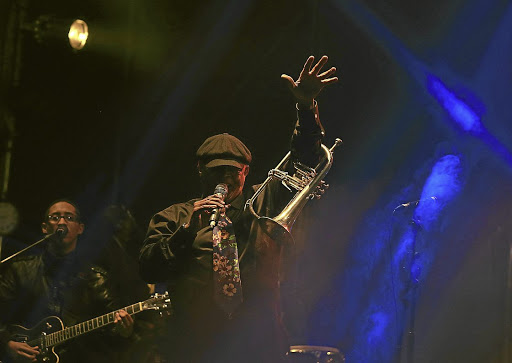 When a person of Hugh Masekela's stature dies, we are always asked not to mourn, but celebrate him, as if it were that easy.

Much as we can say he had a good innings, and that he left a rich musical legacy behind him, it's not easy to pretend we have not experienced a loss.

A lot has been written about Masekela's rise from the obscurity of Sophiatown to the glitz and glamour of New York, his many marriages, his conquests internationally, and his famous friendships - but not much has been said about his humanity.

Which is why it is heartening to know that novelist and film-maker Zakes Mda is working on a movie on the life of Masekela and one of his best friends and mentor, Reverend Trevor Huddleston.

"When Hugh first approached me, he wanted me to do a movie on ... Huddleston," said Mda.

"But Hollywood movie funders thought the movie should be on Hugh, because he was a more recognisable name in the United States."

A compromise was then reached: the movie that Mda ended up doing has the working title The Warrior Priest and The Horn-man. It celebrates the friendship between the Sophiatown-based priest and Masekela.

There is a famous picture of a 16-year-old Masekela, a trumpet in his right hand, jumping for joy in the middle of a street.

When veteran lensman Alf Kumalo shot that picture in 1956, Masekela had just received the trumpet, a gift from Louis Armstrong. Huddleston had been instrumental in securing the gift.

That gift, and Huddleston's encouragement, kept Masekela focused. With his cousin Jonas Gwangwa the trombonist and Miriam Makeba, who would later become his wife (from 1964 to 1966) they got parts in the musical King Kong. After the local run of King Kong, Masekela left for London, where he hooked up with Huddleston again. Huddleston had been kicked out of SA for his opposition to apartheid. In the UK, he was active in the anti-apartheid movement.

After London, Masekela went to New York where he studied music at the Manhattan School of Music.

Before leaving SA, Masekela had already made a milestone - together with saxophonist Kippie Moeketsi, pianist Dollar Brand (now Abdullah Ibrahim) and Jonas Gwangwa - as The Jazz Epistles they recorded the first LP of modern African jazz in South Africa.

While in the States, Masekela's friendship with Huddleston endured. But they crossed swords when Masekela toured with Paul Simon on his Graceland tour.

Huddleston felt that the tour was an insult to the anti-apartheid movement as it broke the cultural boycott against SA. Masekela, on the other hand, felt it gave poor musicians from SA a chance at international exposure.

"Him and Hugh fought a lot on matters of political strategy," explains Mda.

After 1994 Huddleston came back to SA and stayed at an old-age home in Florida. "Of all the prominent ANC activists, only Hugh still had time for Huddleston. He was neither angry nor embarrassed with Huddleston who had picketed him during the Graceland tour."

That is the humanity of the man who was born on April 4 1939 and passed away on January 23 2018. He was a cultural asset of South Africa.