Thank you sexy MaMfundisi for undressing our foolish delusions 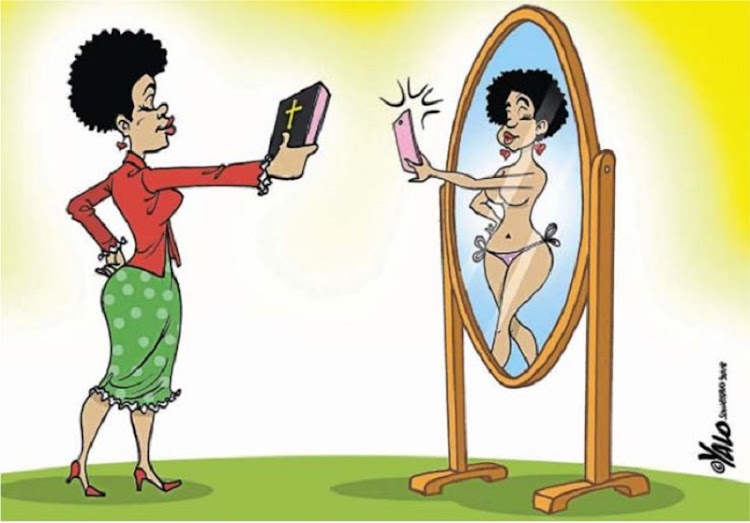 Women's appetite for sex is no one's business to measure, no matter what the general public thinks.
Image: YALO

Children are a gift from God mos, so the only thing the men of the cloth and their beautiful wives get up to in the bedroom is prayer. Right?

Well. this past Friday a sexy young mama raised a storm in the pulpit when - wait for it - not one, but two of her high quality triple X-rated home videos broke the internet. We just didn't expect it!

What made it even more intriguing is the fact that the main and sole character in this sultry drama is a young mother with perky boobs and a small waist. She has that summer body everybody is sweating for at the gym these days - after the festive binge.

She is beautiful, perhaps the very image we never imagined a MaMfundisi could ever be. And God forbid, she is sexy!

Now, while the online community has unanimously concluded that she is a vixen of note, she sure as hell would not be on the run for that "Mother of the Year Award."

The soundtrack to one of her recordings is a little baby crying their lungs out. She pays no mind to the infant, while she is absorbed in the pleasure and sights of beautiful curves in the mirror.

We viewed clips of her nude body and took turns in scrutinising her character and speculating on her moral standing.

The usual reaction that we as a society have towards anyone who actually has a sex appetite and it becomes public.

Actually, has a sex appetite and it becomes public fodder because we publicise it. Because we, the public, will publicise anything we feel should not be in the public eye; so that everybody else can see just how its publicity disturbs the public.

Wearing a woman's body is a tricky existence in itself.

If you are a participant of #ThirstTrapTuesday you could find yourself in big trouble in Tanzania.
News
4 years ago

Wearing nothing on a woman's body is a burden heavier than cotton cloths.

Being seen wearing nothing on a woman's body is a crisis.

Imagine how tricky it is for a pastor's wife to carry such a burden in this crisis! Worse, when she cannot turn to her church community for protection because they are the very judges who broadcast the said videos, her full names and family picture just so we do not mistake her for a random woman out there.

This past Friday, we were confronted by our own delusions and betrayed by our ridiculous expectations. All along, we believed a pastor's wife to be an asexual stiff rod who spits out chorus, collects donations for her pantyhose and visits our grannies for prayers.

But alas! She is a sexual being.

While I understand the trauma she was subjected to, I had hoped that on Sunday she did not hesitate to go to church. I hope she was dressed to the nines, put on a bright red lipstick and carried her Bible outside her bag. That she arrived fashionably late for her husband's sermon and entered the building with a bright halo of sunlight shining over her crown.

Then, when they all turned to look at her with shame and disgust - handed her handbag to the usher and broke out in song. I hope she let out a cloud-breaking rendition of her favourite Brenda Fassie song and ended it with the Lord's Prayer.

I hope they saw her. Heard her. And sat with her for the duration of the sermon. I hope they were minding their own praise and worship instead of scandalising a grown woman for her sexuality!