Let's find solutions for SA's problems and not point fingers 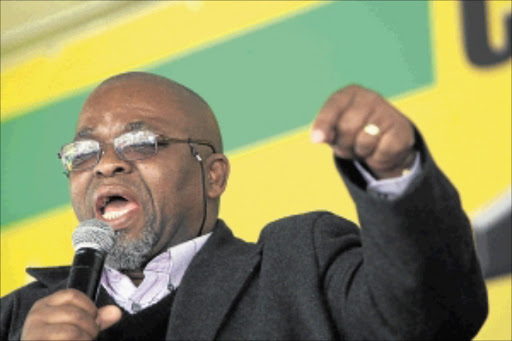 ONE FOR ALL: ANC's Gwede Mantashe addresses the public at the South Gauteng High Court in Johannesburg during the protest against the artwork The Spear. PHOTO: ANTONIO MUCHAVE

OVER the past 12 months the ANC has held discussions with intellectuals, academics and representatives of other sectors of society. The aim was to exchange ideas about our country and to ensure that we craft a common vision about the future.

In all those sessions we derived satisfaction from the keenness of all to engage. Even where there were disagreements they were civil and polite.

A man who had earned my respect, Dr Xolela Mangcu, has not been in these sessions. Even if we assume he was not reached, he never enquired when he read about these sessions.

Now he is making a judgment call from the comfort of a respected institution - the University of Cape Town - that "The ANC has all but sold out on our struggle in ways that are unlikely to be reversed." (Sowetan, October 22).

He makes a further confession that this is not a new discovery but a view he has internalised from his student days when he hated the association of ANC-linked organisations with "their white colleagues in Nusas".

This alone makes me see no intellectual analysis in this article, but a man driven by racial stereotype that blacks should not mix with white colleagues because doing so makes them mediocre.

He calls the ANC "a black political culture bursting with ideas". This assertion is devoid of historic fact and borders on naivety in that even before the ANC became nonracial in composition it worked with the Congress of Democrats, the Indian Congresses and the Coloured Peoples Congress in the Congress of the People (the real one).

It confirmed the value of working with the Communist Party to such an extent that in 1962 the SACP adopted the Freedom Charter. The ANC was honest in the commitment that South Africa belongs to all who live in it, black and white.

Mangcu ideologically does not accept this. To him this is a sellout position.

He drifts into the mantra of the extreme tendency that "there is no vanguard movement, no political leadership and no institutional platforms" through which citizens can participate.

He boasts that the Black Consciousness movement, which dared joined the ANC-aligned student organisations, could not be trusted.

This arrogance drives him to assert that society must wait for them, the chosen, to be more organised.

This means that they are waiting in the wings to take over the revolution and guide it to real freedom.

It is this mentality that guided the strategic approach of his movement not to participate in the negotiations that settled the political impasse between 1990 and 1994.

At that point already, to them engaging the enemy was a sellout position. There is nothing new in what Mangcu is saying about the ANC from a Black Consciousness perspective as a political movement.

Where are our analysts to point to the dangers of the presence of foreign nationals in the planning sessions in the mining areas? Is this a strike or some sabotage aimed at replacing the established companies with some companies that promise workers heaven and earth?

As South Africans we must wake up and resist new neo-colonialism coming under the guise of a revolt by our own.

The mistake we can make is to allow anything to go as long as it hurt our imaginary enemy.

Let us ask ourselves a question: who is funding the mobility of those who want to collapse our economy?

The response should not be that the country is about to collapse. Instead, we should get our heads together and look for solutions, whether it is the education crisis in Limpopo or any other crisis.