African lives cheap as ever 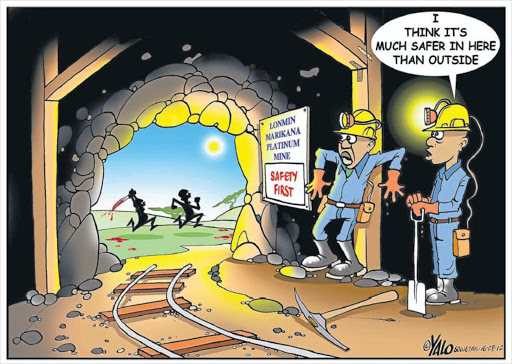 WERE South Africa the normal country that our Constitution envisages - where the right to life is paramount - a calamity of the proportions of Marikana would have led to drastic measures being taken by the government.

Failure to do so would lead to the resignation of the government.

But this is an abnormal country in which all the fancy laws are enacted and the Constitution is hailed as the best on earth. All the right noises are made and yet the value of human life, especially that of the African, continues to be meaningless.

That's what Marikana means. It has raised this unmitigated crudeness as if to awaken us to the reality of the time bomb that has stopped ticking - it has exploded!

Indeed, the life of an African is expendable. We are trying to expose the full extent of the tragedy - with the hope that it will arouse enough outrage to stop such mayhem - by publishing an image of this nature on the front page, but we wonder whether there isn't a numbness that comes with the death of an African.

It has happened in other parts of the world where wars reduced human beings to nothing more than physical particles. It has happened in this country before where the apartheid regime treated black people like objects.

It is continuing in a different guise now. Africans are pitted against each other over who is the rightful representative of workers. They are also fighting for a bigger slice of the mineral wealth of their own country. In the end the war claims the very poor African - again.

The economic problems do require a war. But, a different kind of war - a war of ideas. Not a war that dispenses with human life in as cheaply a manner as we have seen in Marikana.

It also calls into question the capacity of those who run the country. Something drastic must be done - lest we see a snowball effect of this massacre.