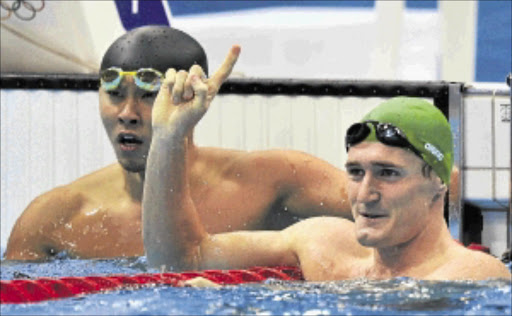 ASIJIKI: We will conquer London. We are born of great kings and queens. We are of warriors and strategists. We are South Africans. Asijiki.

"When I grew up, I used to hang posters of the likes of Penny Heyns on my wall and always believed one day I will be like those greats. Today I am living that dream. Today, I am inspiring the new generation to also be like me."

These are words of the world record holder in 100m breaststroke, the sensational golden boy, Cameron van der Burgh. Prior to the finals, Cameron said to me, "Minister, the country should not disperse after the early exit of Banyana Banyana, we will be on the podium with our flag high." He was true to his word.

Indeed, not only did we win the gold, but we also set a new world record. That's inspirational. That's beautiful. That's encouraging.

Even in Monte Carlo, Monaco, we told all our swimmers that in them medals were guaranteed. They knew and they know they can bring more.

Indeed, we believed before that, when Team SA landed in Britain and the African weather conditions took over - that was the sign of victory. Indeed, that was true to the spirit of the 2010 World Cup when American singer R Kelly sang, I can see the colours of the rainbow. I can feel the sun on my face. I see thelight at the end of the tunnel. And I can feel heaven in its place. Indeed, when our weather cleared up, that was the new beginning for us as Van der Burgh registered our victory as expected. The South African flag flew among the best in the world. It's one medal. and counting.

When our golden boy entered the eKhaya Hospitality Centre at the Queen Elizabeth Hall on the South Bank, where the statue of Nelson Mandela was erected in 1985, he was greeted by the blaring sounds of vuvuzelas blown by Safa president Kirsten Nematendani, former Bafana great Lucas Radebe, Cynthia Tshaka and many more of our patriotic citizens in London. The ululations, the songs and dance welcomed the gate-opener, the golden boy.

You made us proud, son. You showed your peers in the breaststroke. If they want to do it in the South African style, they need to ask you. You are the best.

Ladies and gentlemen, the gates might be open for greater things to happen. Yes, we can see the colours of the rainbow. That's the sign of victory. Others are still on their way to join Van der Burgh, for more South African celebration.

We are made. We are of the hills, the mountains, the rivers, the glades that continue to shape our landscape. Victory is certain. Asijiki.

Let's continue to support Team SA as they continue to create waves and move mountains. We went to London and presented Team SA chef de mission Patience Shikwambana with the SA flag, that sacred instrument that identifies how honorable and great the nation is, and a reminder of the support of the more than 50million strong, proudly South African minds and hearts. A sign of victory, just there! Yes, the greatness in us. Thank you, as we closed off Mandela Month with a gold face in the international arena. Indeed, we are made.

To the youth, we believe that wherever you are, you are inspired and motivated to represent the country in whatever sporting code you belong. The next plane, branded with South African colours - we are hopeful and encouraged that you will be in it.