Putting a stop to amanyala 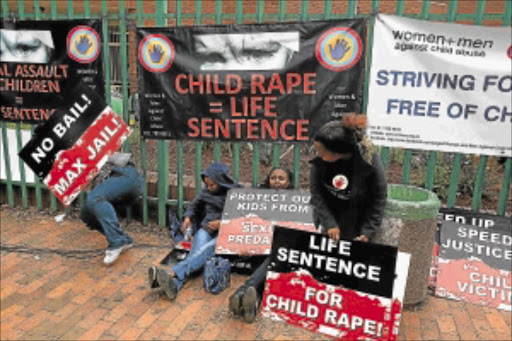 FIRM: Protesters outside the Roodepoort Magistrate's Court during the appearance of seven males accused of raping and recording the rape of a mentally handicapped young woman. Photo: ALON SKUY

WHEN I was growing up in the rural village of Gatyana in Transkei, the word amanyala was interpreted to mean sexual act.

It was frequently used by young adults and frowned on by the elders and the entire community.

It emanated from a game of hide-and-seek which was usually played by teenagers in the rural areas and townships.

My mother used to warn me against mingling with township peers, who usually visited rural areas during holidays.

Due to their exposure to sexual material (such as access to television to which people from the rural areas did not have access) or behaviour, they had the potential to corrupt the rural youth.

The escalating rate of sexual violence by mainly young people, especially under-age boys, has clearly shown that we are living in a sick society where people have total disregard for women and children.

Women are naturally vulnerable and fragile, and expect to be protected by men.

The story in Sowetan last Thursday of an eight-year-old girl alleged to have been brutally raped by a 15-year-old boy is a serious indictment to our society.

It should jolt society to rally behind the National Prosecuting Authority's tireless efforts to aggressively deal with this scourge.

This incident happened barely two weeks after we learnt of the alleged gang-rape of a 17-year-old mentally unstable girl which induced a sense of shock and outrage around the world.

About a month ago, five schoolboys at Port Shepstone in KwaZulu-Natal bunked school, consumed alcohol and allegedly took turns to rape an equally intoxicated young girl, who was their classmate. To rub salt into her wounds, they recorded the silly act on video, which they circulated among their peers and some of the residents of Port Shepstone.

When they appeared before the Child Justice Court, some were carrying their babies on their backs. The question we need to ask ourselves is: If a 14-year-old child has to raise a baby, who is going to take care of the girl herself?

It transpired that the parents in that part of the province saw nothing wrong with what had happened, as they complained about the Department of Education's intervention when officials visited the school and the area. It has also transpired that some of the girls had been staying with their boyfriends at such a young age.

In 2010, when NPA head Menzi Simelane authorised the prosecution of the three Jules High School pupils for engaging in sexual intercourse while under the age of 16 years, this decision was criticised by many, especially legal experts and NGOs, who regarded it as too harsh and aggressive when dealing with children.

This unwarranted attack was indicative of people being ignorant of the fact that the Sexual Offences and Related Matters Act had been in operation since 2007.

Since then no one, including these legal experts and NGOs, have ever raised any reservations about the implications of this legislation. Yet they have made it their duty to vilify the NPA when all it did was to implement the law.

The public has to be reminded that the duty of the NPA and the courts is to interpret and implement laws passed by the legislature.

When we continued to prosecute these children, the criticism was persistent, despite an alarming rate of these incidents.

At that time we had noted with concern that this problem seemed to be continuing unabated as we continued to receive similar cases, the common denominator of which was alcohol and unprotected sexual intercourse.

Simelane at the time therefore made a clarion call to all members of the community, including parents and teachers, to monitor the behavioural trends of learners and children in general, as the NPA could not deal with this serious scourge alone.

If the recent similar incidents are taken into account, the NPA's plea has clearly fallen on deaf ears. One cannot help but wonder what has gone wrong with our society?

Are we still expected to fold our arms and treat the perpetrators with care when they show clear signs of disregard to our diligent efforts to address their behavioural problems?

Parents and guardians have a huge responsibility to monitor the content of their children's cellphones, as children nowadays have easy access to the Internet and can easily download explicit material, which they can circulate and which could tempt them to experiment with adults and their peers.

There is no legal impediment in our Constitution which would make this an infringement of one's children's rights.

Parents might be under the impression that children are asleep at night, while they are in fact in touch with the outside world through social networks.

I impress on parents to apply stricter rules, including confiscating the cellphones at night and handing them back to their children in the morning. That way one would be able to ensure that one's children do not have ties with such illicit material within one's premises.

It should be noted that there is a section in the Act which compels every adult person, who becomes aware of a child or children engaging in sexual intercourse under the age of 16, to report that to the police, failing which that person will be guilty of an offence.

This therefore empowers us to prosecute any adult person, including parents, guardians and educators, who fail to report these incidents to the police.

We must refrain from sitting back and watching the decay of society while we have the legislative framework to address this problem.

The NPA has launched a "Schools Outreach Programme" in order to educate pupils about the implications of engaging in underage sex and the growing tendencies of possessing, creating and circulating pornographic material.

These actions will surely not only cause them having criminal records, but also resulting in the disruption of their lives and having a negative impact on their future in total.

If we have their best interests at heart, we must stand together and prevent them from committing the notorious act of amanyala.