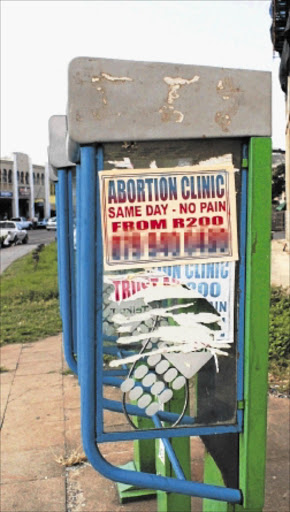 And this would not be ridiculous if so many people didn't take part in causing such avoidable deaths.

Termination of pregnancy remains one of the most severely contested choices women can make about their bodies.

Moralising the issue is always directed at the dead person.

It is a mistake to accept that responsibility ends with the woman concerned.

Statistics and personal testimonies presented in Parliament during the passage of the law on choice of termination illustrated that poor black women were more likely than any other group to die as a result of backstreet abortions.

The discussion was properly framed as equal access to health care and women's rights to make choices concerning reproduction.

How do we then explain that years later, after South Africa had passed one of the world's most comprehensive pieces of legislation on termination of pregnancy, there are still people dying from backstreet abortions?

Women's bodies remain the most vulnerable personal space when it comes to people who want to dictate what moral standards should bind us all.

This is the case here in South Africa and abroad. But here it has not become as politicised as it is in other countries.

But that has not stopped groups that are involved in these fights - particularly in the United States and Europe - from contaminating the progress that South Africa has made in securing women's access to safe termination of pregnancies.

The d epartment of h ealth has been kept busy in courts by organisations that have tried and failed to challenge the progressive provisions that are contained in the law.

Women's rights groups supported government in protecting these gains. The strategies were predictable because they have been tried elsewhere.

When these groups argued that the laws were unconstitutional because there was no mandatory counselling for women who wanted to terminate their pregnancies, it was known that counselling was not what they were after.

What they wanted was a service that would discourage people from seeking termination of pregnancy by asking them to explore other alternatives.

While we have not reached a stage where doctors who perform abortions are threatened with death, as some extremist pro-life groups in the US have decided on as a strategy, what the local anti-choice groups have copied is that women seeking termination of pregnancies can be intimidated to "change" their minds.

Grown-ups take turns picketing outside abortion facilities on Saturdays, and hurl abuse at women whose personal circumstances are completely unknown to them.

Then there are those who have continued to put up posters offering services which are illegal. These are people who are neither qualified nor authorised by law to carry out abortions.

Yet the police insist the Advertising Standards Authority is the proper forum to address this issue. Can drug dealers and murderers take advantage of this development and advertise their services because the police have nothing to do with advertisement of an illegal service?

The state has also been slow in expanding the services in order to make it easily accessible to all those who need it and in educating the broader public about the availability of this service.

A recent study states that a third of South Africans believe that termination of pregnancy is illegal should concern a government that has passed a law that not only served to decriminalise abortion but also made it free and accessible.

People who have an interest in seeing less terminations of pregnancies can spend their time eliminating the factors that cause unwanted pregnancies and, consequently, avoidable deaths brought about by backstreet abortions.

Instead of fighting to protect ignorance that they call innocence, they should encourage sex education and the use of family planning services by sexually active youths.

They should be enraged at the number of men who refuse to pay child support and the ever increasing number of mothers who bear the sole responsibility of looking after children that were conceived by two people.

When we as a society continue to contribute to needless loss of lives, through our various actions and inactions, the fake shock when we learn of another death stinks of hypocrisy more than the foetuses that are retrieved from pit latrines.