A new kind of imperialism rears its head 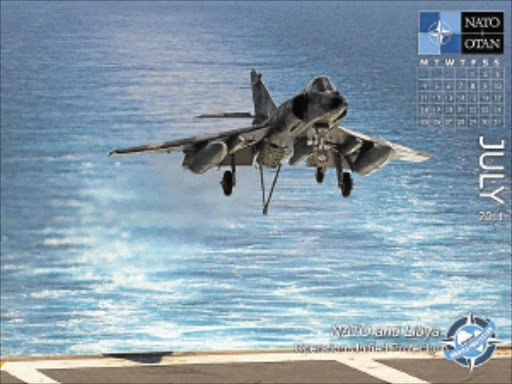 BRAVADO: A menacing downloadable screensaver calendar available from Nato. The organisation's actions had everything to do with the recent overthrow of the Muammar Gaddafi regime.

LAST year we celebrated the 50th anniversary of the adoption by the UN General Assembly of the historic "Declaration on the Granting of independence to Colonial Countries and Peoples".

Among other things the Declaration says: "The subjection of peoples to alien subjugation, domination and exploitation constitutes a denial of fundamental human rights, is contrary to the Charter of the United Nations and is an impediment to the promotion of world peace and cooperation.

"All peoples have the right to self-determination; by virtue of that right they freely determine their political status and freely pursue their economic, social and cultural development."

For the colonised, the declaration constituted an important step forward in terms of expanding the corpus of international law to the extent that it decreed that "all people have the right to self-determination".

To this extent the UN Charter gave legitimacy to continued colonial rule. It is self-evident that this was done at the insistence of the then colonial powers, principally the UK and France.

It goes without saying that the eradication of colonialism, apartheid and white minority rule is one of the great and historic achievements of the period since the end of the Second World War.

There are troubling developments which suggest, ominously, that Africa's right to self-determination, so unequivocally confirmed in the "Declaration on the Granting of Independence.", and entrenched as an important part of international law, is under threat.

In hindsight, it would seem to me that we made a serious error as Africans when we paid virtually no attention to a particular and pernicious thesis advanced by various individuals in the countries of the North, and specifically the UK, arguing for the re-colonisation of Africa.

On April 19, 2008 The Times (London) published an article by Matthew Parris titled The new scramble for Africa begins, in which he said: "Fifty years ago the decolonisation of Africa began. The next half-century may see the continent recolonised. But the new imperialism will be less benign. Great powers aren't interested in administering wild places any more, still less in settling them: just raping them. Black gangster governments sponsored by self-interested Asian or Western powers could become the central story in 21st century African history."

Writing in the New Statesman magazine published on January 15 2001, another British commentator, Richard Gott, writing to oppose this "new imperialism", said: "What Africa really needs, Maier, (in his book This House Has Fallen: Nigeria in Crisis), seems to suggest, is the advice of a new generation of foreign missionaries, imbued with the new, secular religion of good governance and human rights. Men such as Maier himself and RW Johnson would fit the bill admirably.

I am certain that all of us will not hesitate to denounce these arguments in favour of "a new kind of imperialism", "a form of neo-imperialism", "neo-colonial interventions" as constituting a direct and unacceptable challenge to international law, and equally repugnant justification for the repudiation of the solemn "Declaration on the Granting of Independence."

As South Africans we waged a protracted and costly struggle among other things to assert the primacy of the rule of law and to establish a law-governed society founded on respect for justice in all its forms.

In this regard we sought to liberate ourselves from arbitrary rule and injustice and therefore the ineluctably negative consequences of the implementation of the principle that "might is right".

It is in this context that I have raised the important matter of defending and safeguarding the right of the people of Africa to self-determination.

The point I am making is that the UN Security Council accepted that its own actions had to be conducted as prescribed by international law.

In other words, the UN Security Council itself could only carry out its work, and demand acceptance of its decisions by the world community of nations if it respected the rule of law and established international law, as these relate to its own decisions and operations.

Part of what has obliged us to ring the alarm bells about the threat to Africa's hard-won right to self-determination is the reality that in the aftermath of the disappearance of the Soviet Union, and therefore the end of the Cold War, the UN Security Council has been open to abuse with regard to respect for the rule of law and international law.

The outstanding, but not only, example in this regard is what has happened during the greater part of this year relating to Libya.

The incontrovertible fact is that Libya did not give the ANC even one cent, did not train even one of our military combatants, and did not supply us with even one bullet.

This is because Muammar Gadaffi's Libya made the determination that the ANC was little more than an instrument of Zionist Israel, because we had among our leaders such outstanding patriots as the late Joe Slovo.

Libya came to extend assistance to the ANC after 1990, when it realised that the ANC was a genuine representative of the overwhelming majority of our people.

Similarly, the false assertion has been made that the AU depended on Libyan money to ensure its survival. This is yet another fabrication.

The UN Security Council adopted the infamous Resolution 1973 on Libya on March 17, which imposed a "no-fly zone" and authorised various member states "to take all necessary measures . to protect civilians and civilian populated areas under threat of attack in the Libyan Arab Jamahiriya."

The Resolution said nothing about "regime change".

However, the fact of the matter is that the Nato actions had everything to do with the overthrow of the Gaddafi regime.

It is clear that the beginning of the peaceful demonstrations in Libya served as a signal to various Western countries to intervene to effect "regime change".

These countries then used the Security Council to authorise their intervention under the guise of the so-called "right-to-protect".

It is clear to many on our continent that what has happened in Libya has established a very dangerous precedent. The question has therefore been raised - which African country will be next?