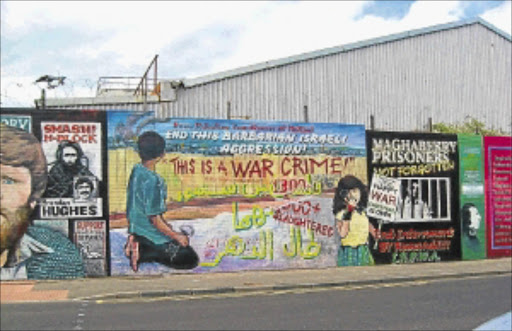 APARTHEID WALL: A mural in Belfast, Ireland, depicting a number of causes, among them Israeli apartheid.

Questions on whether Israel can be compared to South Africa

I AM writing this because I am familiar with both the Israeli and South African views on the forthcoming session of the Russell Tribunal, "Are Israel's practices against the Palestinian people in breach of the prohibition on apartheid under international law".

I live in Israel and in my earlier years, I was an anti-apartheid activist in South Africa. Among my activities, I participated in the World War 2 ex-servicemen's Springbok Legion.

With nearly 60000 members, including a large number of Jews, the legion was probably the first mass movement of whites promoting the liberation of blacks.

As the tribunal bears the imprimatur of that great philosopher and peace activist Bertrand Russell, one expects the panelists to take seriously the principles of moral integrity he exhorted.

Indeed, if the delegates meticulously heed the advice Russell offered in theLast Message to our Descendants, one could look forward to a refreshingly balanced and even-handed report. During a BBC interview, Russell advised: "When you are studying any matter or considering any philosophy, ask yourself only what are the facts and what is the truth that the facts bear out. Never let yourself be diverted either by what you wish to believe or what you think will have beneficial social effects if it were believed". Contrary to Russell's advice, the tribunal appears to be reinforcing preconceived opinions and avoiding inconvenient facts.

How else can one explain the careful selection of a "jury" comprising only prominent persons who have publicly voiced strongly anti-Israel statements and preconceived opinions?

And how does one explain the fact that jurists and members of the public who attend will not be allowed to question speakers? In this climate, unlike in a democratic debate or  court of law where both sides are heard, even the most misleading statements will go unchallenged and the totally unjustified anti-Israel apartheid canard will be propagated, without the benefit of honest intellectual examination.

This outstandingly undemocratic attitude flies directly in the face of Russell's exhortation to seek the facts and avoid being diverted either by preconceived opinions or what we wish to believe.

Many more authoritative voices have declared the Israel apartheid allegation to be maliciously unjustified. The large amount of money spent in organising this elaborate theatre to examine whether Israel practices South African-style apartheid will be a complete waste if, contrary to Russell's advice, FACTS like the honest examination by many authoritative experts are deliberately ignored.

I refer to Judge Richard Goldstone, a severe critic of Israel who was described in a New York Times article of March 8 1993 as "perhaps the most trusted member of the white establishment, in a land of corrosive suspicion".

It would be an outrageous display of inconsistency and a travesty of rational thinking if Goldstone's former admirers reject his now inconvenient view, expressed in his oped that "In Israel, there is no apartheid. Nothing there comes close to the definition of apartheid under the 1998 Rome Statute.

"The situation in the West Bank is more complex. But here too, there is no intent to maintain an institutionalised regime of systematic oppression and domination by one racial group" (New York Times, October 3).

Real apartheid that the tribunal cannot in good conscience ignore.