Rise of the individual 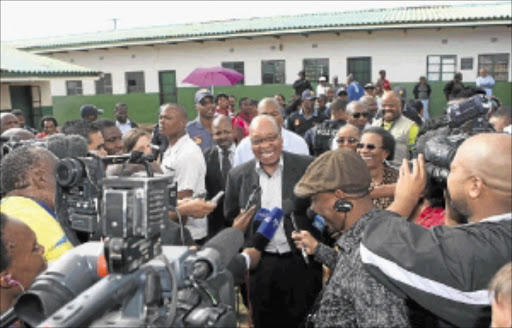 INNER STRIFE: President Jacob Zuma addresses the media after casting his vote earlier this year. The ANCYL is increasingly opposing the party for its own gain. Photo: Thembinkosi Dwayisa

THE situation with the ongoing disciplinary hearing against Julius Malema and other leaders of the ANC Youth League indicates that some members within the ANC are pulling the party towards their version of what is in the public interest and what the party should stand for.

Though this is seen as bringing the party into disrepute, the crux of the matter is that there is a contest as to which direction the ANC ought to take in relation to policy and other issues.

Openly exerting pressure on a political party is allowed in a constituency system in which party members bring votes to the party, but not in a proportional representation system where the party is supreme and more centralised.

If we observe the way in which Malema built his power in Limpopo, it is clear he is beginning to bargain with the ANC about Limpopo as a support base for the party.

Malema is behaving like a leader in a constituency electoral system where he brings voters to the ANC in return for the party keeping quiet about his dodgy business deals in the province, as well as his controversial utterances through which he promotes himself as an individual above the party.

If the ANC pushes too hard against the leader who sees himself as bringing the Limpopo support base, the party would have to bear the cost of support turbulence in the province.

The ANC is becoming weaker when it comes to showing a presence in various provinces and has come to rely on individuals in provinces to do the work that is supposed to be done by the party.

Those individuals tend to promote themselves above the party, trading their popularity and grasp of provincial support base to the ANC.

Mpumalanga and Limpopo are interesting cases in which individuals have gathered complex power bases through which they continue to bargain with the ANC.

Such people gain access to government tenders in an openly corrupt manner. They are aware the ANC is weakening in provinces such as Western Cape and Eastern Cape.

Mpumalanga and Limpopo bring a larger number of voters to the ANC and this coincides with the level of patronage and rot in those provinces since the provincial leadership feels entitled to some returns for that.

The individual ANC leaders in these provinces function in a similar way leaders do in a constituency system. They effectively engage in some form of patronage politics in which they bring support to the party in return for concessions from the top leadership.

They demand the party stays quiet about their corrupt activities and mini-empires they build above the party in provinces.

The ANC has to turn a blind eye to deals such as those seen in the construction of Mbombela Stadium in Mpumalanga and the tendering process followed in Limpopo.

This approach stands against the logic of the proportional representation system, which is currently followed in South Africa.

Under the proportional representation electoral system, individual members of a political party are required to submit to the party and not the other way around.

The party ultimately fields members to government positions according to its internal list system. So it is required under this system that the party ought to be well organised in such a way as to be able to rein in individual members.

If it were under the constituency system, where individuals bring voters to the party, Malema and his comrades would not have to face disciplinary hearings.

In a constituency system members of a political party may openly question the stance of their party on certain issues.

The proportional representation system is not really working to its logical conclusion.

The sad thing is that individuals outside the ANC are not allowed to participate in elections under the constituency system.

However, with weaker and disorganised political parties, the proportional electoral system will only allow for corruption by dominant party members who thrive on patronage.