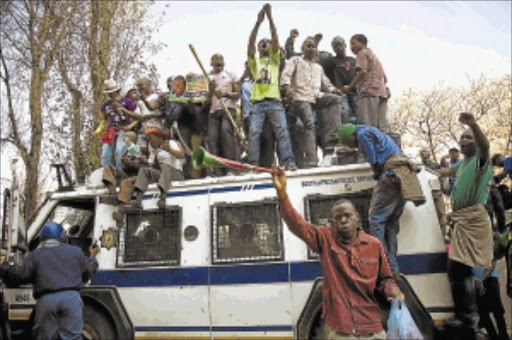 THERE is big difference between functioning as a ruling political party in a modern democratic society and operating as a party that spearheads the liberation movement against colonialism or apartheid.

The ongoing disciplinary hearings that the ANC has instituted against its youth wing leaders is an indication that the party cannot continue to improvise by drawing on its history and character as a leader of the liberation movement.

The ANC is in effect a political party with responsibility to lead government in a society whose citizens have deeply entrenched competing interests and priorities.

The question that emerges as the disciplinary hearings against the ANC Youth League leaders continue, is whether the ANC is well poised to carry itself as a stable political party capable of managing day-to-day activities as a ruling party in a modern, open and democratic society.

The evidence thus far shows that the ANC has not been able to reconstitute itself as a manager of conflicting interests.

To be able to do that, the ANC has to adopt new ways of managing its relationship with its structures such as the youth league, alliance partners, and other lobbyists who may try to capture the attention of the party.

The latest escalation of tensions between the ANC and the youth league shows exactly that their respective roles, and hence their relationship, have not been redefined in the context of the ANC being a ruling party.

The insistence by the youth league that it is within its rights to adopt policy positions on a variety of issues - nationalisation of mines, appropriation of land without compensation and a call for regime-change in Botswana - is to be expected.

This is because the youth league understands itself as an activist wing of the ruling party, in the context in which the ANC is a leader of the liberation movement and not a ruling party.

While the substance of what the youth league is calling for is something that can be debated and questioned, it is rather important to look at the manner in which the ANCYL understands its function in relation to the mother body.

The youth league correctly sees itself as qualified to make such policy calls to the ANC. This is the role of an activist wing. That these calls are causing frustrations in government and are not well thought through policy positions is not really important.

We need to ask, for example, what would be the public reaction if the youth league had taken a stance that police commissioner General Bheki Cele should be removed from office because the public protector had cast doubts on his ability to act in the interest of the public.

The issue should not only be about the substance of what is being said by the league, but also about the procedure and space in which that was said.

The reality is that the aggressive activism displayed by the youth league only shows it is still caught in the relationship cycle in which the ANC is operating essentially as a leader of the liberation movement and not as a ruling party in charge of government.

The idea that the ANC is a "broad church for all" is the most clear indication that the party has not formulated a criterion for managing its relationship with partners and other structures affiliated to the party.

Even a church would have criteria through which it manages members of its congregation; criteria that would ensure the survival of the church and its ability to provide a space for worshippers.

The ANC has rather awoken to the harsh reality that it has not adopted some procedures or framework that would define the area of function for its affiliates, including the ANCYL. The party has to state exactly where the mandate of the youth league begins and where it should end. Assuming the ANCYL should have access to the ANC, it is a surprise when the league communicates with the party as if their offices aren't in the same building.

Inability to define the role of its affiliates stems from the fact that the ANC refuses to see the need to organise itself as a modern political party, and continues with the nostalgia of being the leader of the liberation movement.

What is taking place through the disciplinary hearings at Luthuli House are attempts to define the functioning space of the ANCYL in retrospect. The ANC is trying to say to the youth league that it cannot cross the line.

The reality is that the line was not there when the youth league took the path it took. The reason why the entire disciplinary fiasco continues to smack of sinister motives to remove politically inconvenient leadership of the league is that there has not been violation of any known code.

Rather, there has been the collapse of internal framework for engagement between the two. This has happened because the ANC continues to carry itself as "King ANC", instead of coming to terms with the reality that it requires a certain amount of management of the regime that would mediate its relationship with its affiliates in a modern democratic society.

To define a criterion for proper management of the relationship between the ANC and its affiliates requires the party adheres to some level of internal democracy, something the party has not done impressively.