Comrade Malema, you are just another ruthless politician 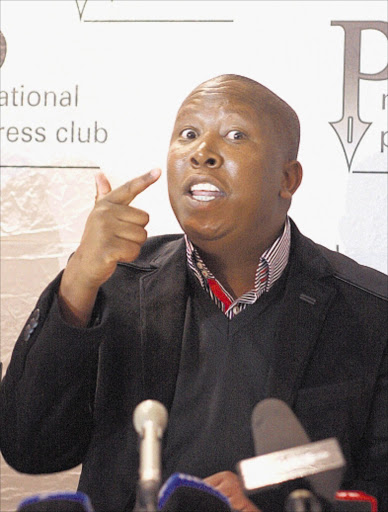 DEAR Comrade Malema, I write this open letter to express my utter disappointment in you...

The media revelations of how you made the wealth to fund your lifestyle can't be brushed aside anymore.

I don't know if you know the saying: "Behind every great fortune there is a great crime". But recent reports prove just that.

Comrade, the wealth and comfort enjoyed by whites in South Africa is a product of historical violent theft of our land, labour and destruction of the African way of life.

Instead of fighting to redress these historical injustices, you have now literally joined those who stole from us to set yourself up, while the people continue to suffer.

When I heard that you were demolishing a R3,6million house in Sandton to build a better one for R16million, I calculated that you would be living in a R20million house.

I found the idea of destroying a house in a country that has a huge housing backlog a cruel act by one who claims to represent the poorest of the poor.

I know you know a place called Setswetla in Alexandra township. You where there just before the local elections with Human Settlements Minister Tokyo Sexwale and others.

The R20million could solve the appallingly hellish condition of the people of Setswetla. Do you know how many RDP houses could be built with R20million?

Exactly 50 years ago Frantz Fanon wrote that the curse of post-colonial Africa were the leaders who took over from the colonialists only to become black colonialists themselves.

He warned that such people take power from the whites to serve themselves, not the people, while using the rhetoric of a better life for all.

He called such leaders the comprador. You have become a comprador even before you take formal power as an official politician. The comprador, according to Fanon, is engaged in "conspicuous consumption". Please check the meaning of this concept in the dictionary, sir.

I'm disappointed because of all the leaders we have, you have stood up and spoken about the real issues that your party has avoided.

But it is clear now; you have been an opportunist who raised these issues, not to solve them, but to trick the poor who have been waiting for a better life for all for almost 20 years now under your party's rule.

Instead of leading the new struggle as a selfless leader of the poor, you only pay lip service to the plight of our people while you amass great amounts of wealth through your political influence.

You could have chosen a different path sir, the path of Thomas Sankara, who sacrificed all personal comforts to serve the people.

Or you could have chosen, just like the youth leaders of June 16 1976, such as Tsietsi Mashinini and Khotso Seatlholo, to be guided by the principle of "the people first".

No, instead you put yourself first! The black youth of this country has been abandoned by the ANC government. They looked up to you and you have let them down badly.

You are just another ruthless politician in the ANC alliance, who uses words to deceive.