Victim mentality back among blacks 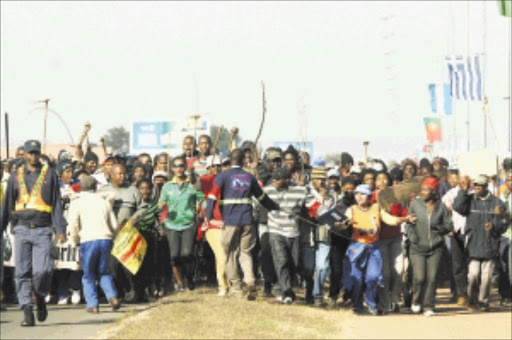 A SERIOUS bout of black self-doubt and a sense of entitlement stand in the way of South Africa's prosperity. We continue to display morbid symptoms that prevent us from forging a new society.

Marxist philosopher Antonio Gramsci's famous quote, "The crisis consists precisely in the fact that the old is dying and the new cannot be born; in this interregnum a great variety of morbid symptoms appear", sheds some light on our present predicament.

We are caught up in the beliefs that apartheid bestowed on us. The symptoms generally manifest themselves as disengagement from mainstream politics, cynicism, the rise of technocracy and corruption.

The self-proclaimed "voices of reason" project South Africa as either at the crossroads or headed for a banana republic. Theirs is a refrain rooted in Afro-pessimism of the kind we heard under apartheid. The seeds of self-doubt were planted then.

Apartheid masters did not tire of reminding us that we are lucky - that our oppression was well intentioned and for our benefit. They pointed out what self-government has done to the continent by enumerating failures of African governments north of the Limpopo. Indeed, we were oppressed for our own sake.

This colonial imprint is prevalent, and perhaps acute among the educated class whose role is limited to fault-finding.

Those who howl the loudest often have nothing pragmatic to offer. For their effort they are rewarded handsomely with headlines and positions on boards of directors.

Their behaviour is reminiscent of house slaves, whose perspectives were intrinsically linked to their masters and could not imagine a world without their master's tutelage. This is not meant to pour scorn on social critique.

If anything, we need ruthless criticism. But meaningful contribution does not end with fault-finding. It requires one to roll up one's sleeves and dirty one's hands.

It involves problem posing and problem solving. No successful organisation or nation can be built on negativity, self-doubt or harping on its failings.

Management guru Peter Drucker puts it elegantly when he says: "The unique purpose of organisation is to make strength productive ... one cannot build on weaknesses. To achieve results, one has to use all the available strengths ... these strengths are the true opportunities."

Unfortunately, we have been socialised into doubting ourselves. As a result we focus more on negatives than positives, making it difficult to maximise our potential and opportunities that present themselves.

We need to counter the tendency toward negativity with an abundance of positivity. This is the only way we can uplift ourselves and nourish a positive outlook.

Hopefully, the recent municipal elections will debunk the notion that our democracy is in crisis.

In coming out in their millions to vote in this year's municipal elections, South Africans have once again disproved the prophets of doom who routinely claim that South Africa is on the brink of a catastrophe.

When the regime-dislodging Arab Spring revolutions hit Tunisia and Egypt, the peddlers of doom were parachuted onto our TV sets to do what comes naturally - to take us downward the spiral of negativity.

Any suggestion that the South African context is different and more complex was dismissed as either an acute form of denialism or wishful thinking. If anything, what is presented as analysis is nothing more than a cacophonous expression of racial prejudice against anything run by black people.

Evidently, South Africans do not share the above apocalyptic visions. They still hold the view that change can be effected through the democratic process. Interestingly so, as soon as the electoral campaign started, we saw a major reduction of protests.

The above notwithstanding, there is no denying that we are also witnessing a major democratic deficit in our politics. This deficit presents itself in how democracy is understood. In this deficit model, democratic engagement starts and ends in casting one's vote.

This reflects the general anti-intellectual stance that has reduced voting to a mere exercise that should produce technical services.

Is it any wonder that some communities vowed not to vote because their vote has not translated into material and social benefits? Individuals have been bold to state they have voted thrice without the vote translating into a house, access to water and/or electricity.

This limited understanding has spawned a "what's in it for me" syndrome and is unfortunately widely shared across class lines.

In this (il)logic there would be no need for an Oppenheimer, a Motsepe or a Mandela to vote because no material benefit would accrue from their action. The notion of doing something for something greater than ourselves is lost.

We have forgotten easily and quickly that the right to vote is an outcome of sacrifices by many courageous men and women who not only faced torture, imprisonment, exile but also paid the highest price through state sanctioned executions and assassinations.

This is how they are repaid for their sacrifices!

Understandably, the government's provision of houses and of increasing access to electricity and water was well-intentioned. It is part of the transformation agenda aimed at redressing the apartheid-generated racial, social and economic inequalities.

Unfortunately, this noble intention has been vulgarised into a vote-catching exercise. The vote-service-delivery discourse is paralysing because it encourages people to stand on the sidelines and expect that the government will be an answer to all their problems.

It does not suggest any action from the recipient of "service" and "delivery", but an idle wait for these. The sooner we dispense with this discourse the better. Nothing short of a heavy dose of black consciousness will address this sense of dependency and entitlement.

The black consciousness (BC) philosophy induced pride and dignity in black people and demanded of black people to become their own liberators. In doing so, it located the possibility of change within the black community.

Today's dependency is on the government and takes the form of entitlement. It is an entitlement that enslaves the majority of black people to feel powerless in changing their lot.

The effect is that they fail to appreciate their psychological complicity in remaining in the conditions they find themselves. The vote-service-delivery discourse is the cannon fodder for this debilitating condition.

Sadly, many liberation-inducing aspects of the BC legacy have waned with the years. The victim mentality has crept in and the element of self-respect and pride has largely disappeared.

We are of the opinion that there are many policies in the country that seem to encourage indolence, entitlement and self-disrespect.

These include the notion that to be a successful business person one needs to be well connected. This has resulted in the stultification of the most innovative brains, making it difficult to come up with new and innovative business ideas.

Empowerment deals that are not invested in new ideas won't take us forward.