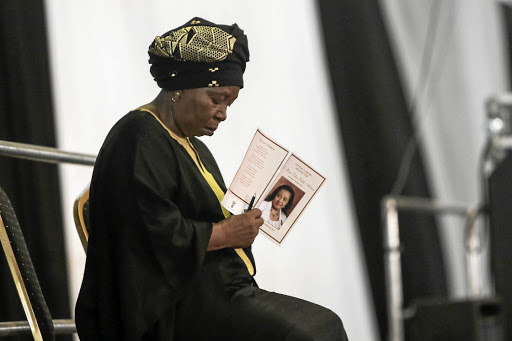 Minister in the presidency Nkosazana Dlamini-Zuma's leadership skills are ignored and what takes precedence is the fact that she used to be former President Jacob Zuma's wife.
Image: Alaister Russell

It is a day that progressive movements throughout the world use to focus the public's attention on issues of women's rights.

Its roots are in the US where, in 1909, the Socialist Party of America organised the first Women's Day event. Subsequently, the day was commemorated by left-leaning movements and countries.

In 1975 it gained universal recognition when the day was adopted by the UN.

Since then, so much has been achieved in terms of women's rights. Today, it is easy to forget that in 1909, women in the US and elsewhere were not guaranteed basic rights such as the right to vote.

It is unfortunately true, however, that we still have a long way to go in ending patriarchy and changing attitudes of those who still believe that women are inferior to men.

In our own country, the struggle for gender equality has scored some major victories over the years. Yet in practice, women still suffer from gender discrimination and violence. Even at leadership level, progressive policies that insist on gender parity among those who hold public office have not entirely changed sexist attitudes towards women in positions of authority.

When long-time cabinet minister and veteran politician Dr Nkosazana Dlamini-Zuma ran for the ANC presidency in 2017, there were those who sought to undermine her candidacy by painting her as a mere front for her ex-husband and then president Jacob Zuma.

We are seeing a similar approach towards mining magnate Bridgette Radebe. Her appointment as one of five South African business personalities who will serve in the Brics Business Council has sparked claims of "nepotism" from quarters who suggest she got the appointment because she happens to be married to energy minister Jeff Radebe and is sister-in-law to President Cyril Ramaphosa.

Like in the case of Dlamini-Zuma, her track record in leadership positions over the years is overlooked and her intimate involvement with Brics since 2013 is ignored. This is sexism and must be condemned, failing which the role of women as leaders in our society will always be second-guessed and undermined.