To the young, it's all in your hands now 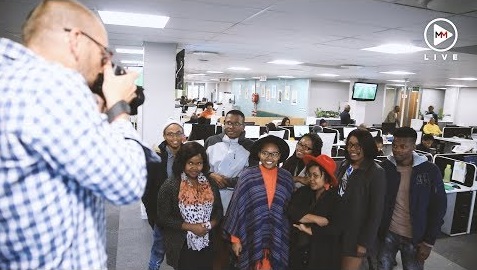 The Sowetan newspaper took Youth Day literally and challenged its young journalists by giving them charge of the Youth Day edition of the paper.

Friday's edition of the Sowetan was put together by staff members under 35 years of age.

It is our way of commemorating the 42nd anniversary of June 16 1976. Handing over the newspaper's production to the youth demonstrates our confidence in the future of our publication and nation as a whole.

For South Africa is blessed with highly talented, committed and energetic young people. As you would see from some of the stories we cover in this edition, many of the youths are doing amazing things for themselves and look set to take South Africa onto a whole new level in the future.

While adults are still bickering over the land question, some of our youths are venturing into agriculture and disproving the fallacy of apartheid thinking that assumes that success in farming is determined by one's skin colour.

Khanya and Lilitha Bam are hoping redistribution of land will benefit their already thriving egg-hatching business.
News
4 years ago

Sadly, the vast majority of our youths are still unable to unlock the opportunities that came with the freedom the youth of 1976 and others fought so hard for. They are trapped in the cycle of poverty, unemployment and an education system that remains unsuitable for today's economy.

Despite a progressive constitution that promotes non-racialism and human rights, some of our young still go to schools where they still suffer racial abuse.

We would not be faithful to the values the '76 generation stood for if we do not strive to put an end to these conditions. What is encouraging is that, despite talks of youth apathy dominating the public discourse over the past decade, the last few years have shown a growing level of political consciousness in our youth.

The #FeesMustFall movement on university campuses and other youth initiatives throughout the country are increasingly proving to be this generation's answer to the challenge thrown at them by Steve Biko's Black Consciousness generation of the 1970s.

Of course, the methods of Struggle are not the same, they cannot be, as the South Africa we live in today is far different from the racist state the youth of 1976 lived under.

The principle, however, stays the same: Today's youth can only guarantee that future generations live in a better country than they currently live in if they confront the injustices that exist today. This was true in 1976 and it is still true today.