Britain swelters on its hottest day ever as temperatures hit 40C 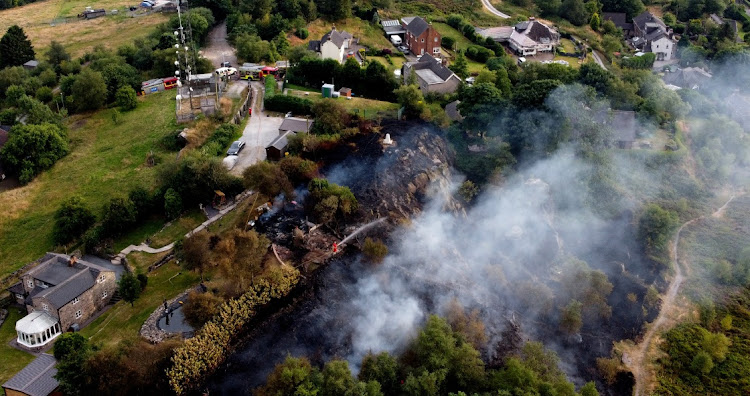 Britain recorded its hottest day ever on Tuesday, with the temperature exceeding 40C (104F) as a heatwave gripping Europe intensified, forcing train tracks to buckle and fuelling a spate of fires across London.

The Met Office said a new provisional record temperature of 40.3C (104.5F) was recorded in Coningsby, in central England, with 34 sites across the country experiencing temperatures in excess of the previous high of 38.7C (101.7F) recorded in 2019.

Stephen Belcher at the Met Office said he had not expected to see such temperatures in Britain in his career.

“Research conducted here at the Met Office has demonstrated that it's virtually impossible for the UK to experience 40C in an undisrupted climate but climate change driven by greenhouse gases has made these extreme temperatures possible,” he said.

London Fire Brigade declared a major incident and urged people to stop having barbecues, as hundreds of firefighters battled blazes across the capital.

Authorities across southern Europe battled on Sunday to control huge wildfires in countries including Spain, Greece and France, with hundreds of ...
News
4 weeks ago

To the east, a large fire engulfed homes in the village of Wennington, with flames tearing across about 40 hectares (100 acres) of neighbouring tinder-dry fields. Elsewhere large grassland areas around the capital caught fire, billowing smoke over major roads and nearby areas.

London's Ambulance Service said it had been dealing with 400 calls an hour because of the extreme heat.

“We are seeing an increase in the number of patients experiencing heat exposure, breathing difficulties, dizziness and fainting,” said Peter Rhodes, the deputy director of ambulance operations.

Britain, which can struggle to maintain key transport services in extreme heat or snow, had been put on a state of national emergency over the unprecedented temperatures.

“My thanks go to all the firefighters and front line services who are working incredibly hard to keep us safe on this scorching day,” Prime Minister Boris Johnson said on Twitter.

Transport minister Grant Shapps said there had been a considerable amount of travel disruption.

“Infrastructure, much of which was built from the Victorian times, just wasn't built to withstand this type of temperature,” he said.

“Extreme Heat: All services stopped. Do not come to the station,” Avanti West Coast, which runs services from London to cities such as Liverpool, Manchester and Glasgow, said on Twitter.

Sony Kapoor, a climate and macroeconomic professor at European University Institute, said he had long thought that people underestimated the physical impacts of climate change in contemporary times. “But even I never thought we would see 40 degree Celsius in London in 2022,” he said.

The arrival of a searing heatwave that first sparked wildfires across Europe before arriving in Britain has turned the spotlight on to “net zero” pledges made by the candidates running to replace Boris Johnson as prime minister.

After Johnson championed the move to net zero status when Britain held the United Nations COP26 climate change summit in 2021, some of the candidates to replace him have appeared more lukewarm and rated other challenges facing the country as their priority.

After Tuesday's heat, the Met Office said the temperature would fall on Wednesday, however it warned there could be heavy thunderstorms.