Tens of thousands rally against gun violence in Washington, across US 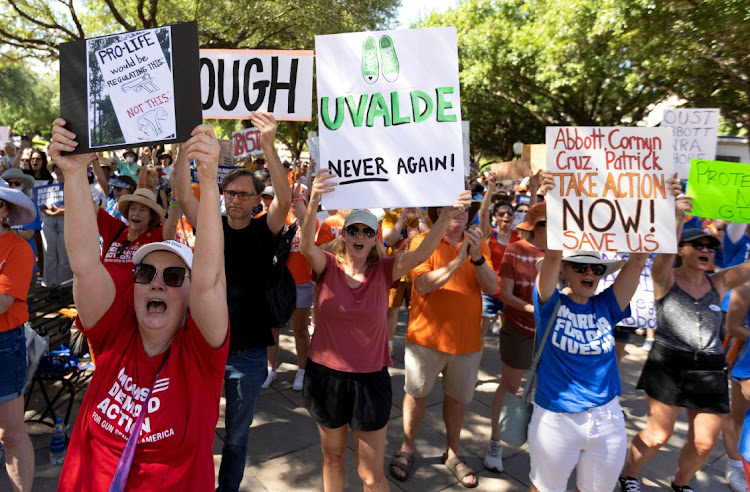 Rhonda McMahon of Austin, Texas, left, cheers on speakers during a "March for Our Lives" rally, one of a series of nationwide protests against gun violence, in Austin, Texas, US on June 11, 2022.
Image: REUTERS/Nuri Vallbona

Tens of thousands of demonstrators descended on Washington and at hundreds of rallies across the United States on Saturday to demand that lawmakers pass legislation aimed at curbing gun violence following last month's massacre at a Texas elementary school.

In the nation's capital, organisers with March for Our Lives (MFOL) estimated that 40,000 people assembled at the National Mall near the Washington Monument under occasional light rain. The gun safety group was founded by student survivors of the 2018 massacre at a Parkland, Florida, high school.

"It left me raw," she said. "I can't believe she's going to be 11, and we're still doing this." Kay Klein, a 65-year-old teacher trainer from Fairfax, Virginia, who retired earlier this month, said Americans should vote out politicians who refuse to take action in November's midterm elections, when control of Congress will be at stake.

"If we truly care about children and about families, we need to vote," she said.

A gunman in Uvalde, Texas, killed 19 children and two teachers on May 24, 10 days after another gunman murdered 10 Black people in a Buffalo, New York, grocery store in a racist attack.

The shootings have added new urgency to the country's ongoing debate over gun violence, though the prospects for federal legislation remain uncertain given staunch Republican opposition to any limits on firearms.

In recent weeks, a bipartisan group of Senate negotiators have vowed to hammer out a deal, though they have yet to reach an agreement. Their effort is focused on relatively modest changes, such as incentivizing states to pass "red flag" laws that allow authorities to keep guns from individuals deemed dangerous.

"We are being murdered," said X Gonzalez, a Parkland survivor and co-founder of MFOL, in an emotional speech alongside survivors of other mass shootings. "You, Congress, have done nothing to prevent it."

Among other policies, MFOL has called for an assault weapons ban, universal background checks for those trying to purchase guns and a national licensing system, which would register gun owners.

Biden told reporters in Los Angeles that he had spoken several times with Senator Chris Murphy, who is leading the Senate talks, and that negotiators remained "mildly optimistic."

The Democratic-controlled US House of Representatives on Wednesday passed a sweeping set of gun safety measures, but the legislation has no chance of advancing in the Senate, where Republicans view gun limits as infringing upon the U.S. Constitution's Second Amendment right to bear arms.

Speakers at the Washington rally included David Hogg, a Parkland survivor and co-founder of MFOL; Becky Pringle and Randi Weingarten, the presidents of the two largest US teachers unions; and Muriel Bowser, the mayor of Washington, DC.

Two high school students from the Washington suburb of Silver Spring, Maryland - Zena Phillip, 16, and Blain Sirak, 15 - said they had never joined a protest before but felt motivated after the shooting in Texas.

"Just knowing that there's a possibility that can happen in my own school terrifies me," Phillip said. "A lot of kids are getting numb to this to the point they feel hopeless."

Sirak said she backed more gun restrictions and that the issue extended beyond mass shootings to the daily toll of gun violence.

"People are able to get military-grade guns in America," she said. "It's absolutely absurd."