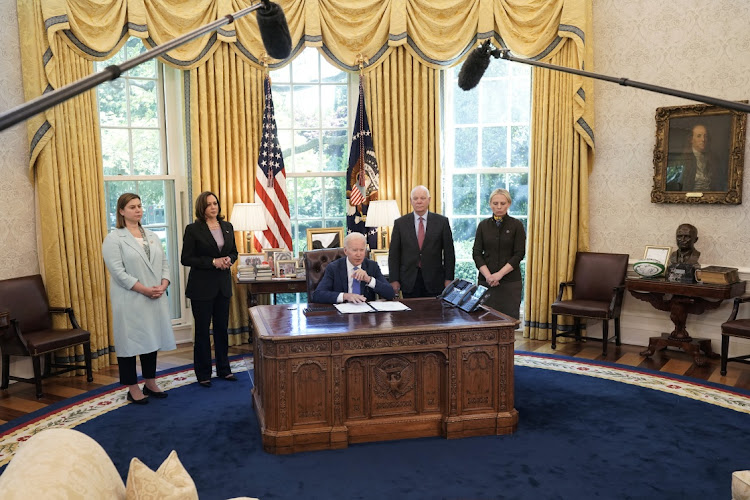 US President Joe Biden speaks before signing S. 3522, the "Ukraine Democracy Defense Lend-Lease Act of 2022," in the Oval Office of the White House in Washington, D.C., US, on Monday, May 9, 2022. Biden signed the measure into law designed to make it easier for the US to send weapons and supplies to Ukraine as the country continues to fight off a Russian invasion that began in February.
Image: Yuri Gripas/Abaca/Bloomberg

The US House of Representatives approved more than $40 billion more aid for Ukraine on Tuesday, as Congress races to keep military aid flowing and boost the government in Kyiv as it grapples with the Russian invasion.

The House passed the Ukraine spending bill by 368 to 57, with every 'no' vote coming from Republicans. The measure now heads to the Senate, which is expected to act quickly.

President Joe Biden had asked Congress to approve an additional $33 billion in aid for Ukraine two weeks ago, but lawmakers decided to increase the military and humanitarian funding.

“This bill will protect democracy, limit Russian aggression, and strengthen our own national security, while, most importantly, supporting Ukraine,” Democratic Representative Rosa DeLauro, who chairs the House Appropriations Committee, said as she urged support for the spending package.

Biden had called on Congress to move quickly so he could sign the bill into law before existing defence aid for Ukraine runs out later in May.

Some Republicans opposed the bill, criticising Democrats for moving too quickly to send too many US taxpayer dollars abroad. Biden's fellow Democrats narrowly control Congress, but the bill will need Republican votes to get through the Senate.

Oksana Markarova, Ukraine's ambassador to the US, appealed for assistance to both Democratic and Republican senators at their weekly party lunches on Tuesday.

“It was a very heartfelt and easy to understand message: Their people are dying, they're running out of supplies and ammunition. They need our help quickly. Thank you for all our help. Please. Speed it up,” Democratic Senator Dick Durbin said after Markarova spoke.

“I think it will pass. There will be significant Republican support,” he said.

The package includes $6 billion for security assistance, including training, equipment, weapons and support; $8.7 billion to replenish stocks of US equipment sent to Ukraine, and $3.9 billion for European Command operations.

In addition, the legislation authorises a further $11 billion in Presidential Drawdown Authority, which allows the president to authorise the transfer of articles and services from US stocks without congressional approval in response to an emergency. Biden had asked for $5 billion.

It also authorises $4 billion in Foreign Military Financing to provide support for Ukraine and other countries affected by the crisis.

The US has rushed more than $3.5 billion worth of armaments to Ukraine since Russia invaded, including howitzers, anti-aircraft Stinger systems, anti-tank Javelin missiles, ammunition and recently-disclosed “Ghost” drones.

The new aid package also includes humanitarian assistance — $5 billion to address food insecurity globally due to the conflict and nearly $9 billion for an economic support fund for Ukraine.

It provides hundreds of millions of dollars to help refugees and fund efforts to seize the assets of oligarchs linked to Russian President Vladimir Putin, whose government has called the invasion of Ukraine a “special military operation.”

The war has killed thousands of civilians, forced millions of Ukrainians from their homes and reduced cities to rubble. Moscow has little to show for it beyond a strip of territory in the south and marginal gains in the east.

DA leader John Steenhuisen has warned that the war between Russia and Ukraine is far from over and says he will put pressure on the ANC-led ...
News
2 weeks ago

The Russian ambassador to Poland was doused in a red substance on Monday by people protesting against the war in Ukraine as he went to lay flowers at ...
News
2 weeks ago

The International Monetary Fund's executive board on Monday approved a three-year, $456 million extended credit facility arrangement for Mozambique, ...
News
2 weeks ago
Next Article