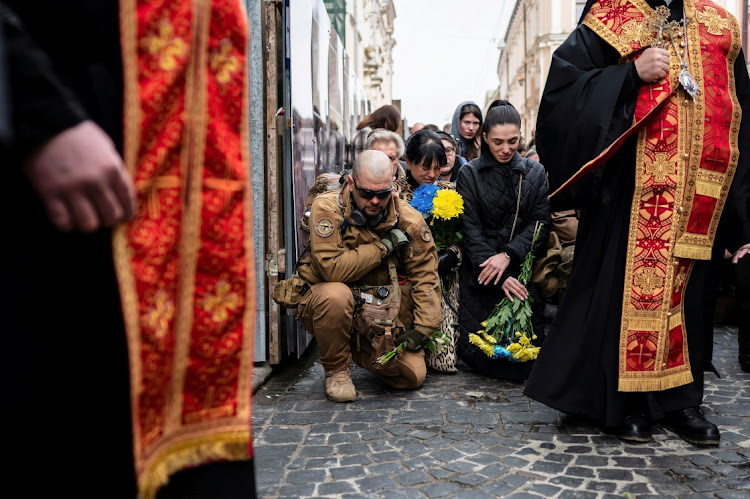 People kneel during the funeral of Yuriy Dadak-Ruf and Taras Kryt, killed due to artillery shelling in the Luhansk region, as Russia's invasion of Ukraine continues, in Lviv, Ukraine, on April 9 2022.
Image: REUTERS/Viacheslav Ratynskyi

Valentyn Reznichenko, governor of the central Dnipropetrovsk region, said emergency workers were combing through an infrastructure facility that was hit in the town of Zvonetsky, adding that details on casualties would be given later.

President Volodymyr Zelensky said Russia's aggression was never limited to just Ukraine and the whole of Europe was a target as he urged the West to ...
News
4 months ago

Reznichenko said on Telegram that there had also been an attack on the airport in Dnipro city.

“The airport itself was destroyed, as well as nearby infrastructure. And the rockets fly and fly,” Reznichenko said.

Reznichenko said earlier an attack on Dnipro had wounded one person and the rockets had sparked a fire that was eventually put out. A missile had also hit a building in the Pavlograd district, he added.

Serhiy Gaidai, governor of Luhansk, an eastern region bordering Russia, wrote earlier on Telegram that a school and a high-rise apartment building had been hit in the city of Sievierodonetsk.

Reuters could not immediately confirm the reports.