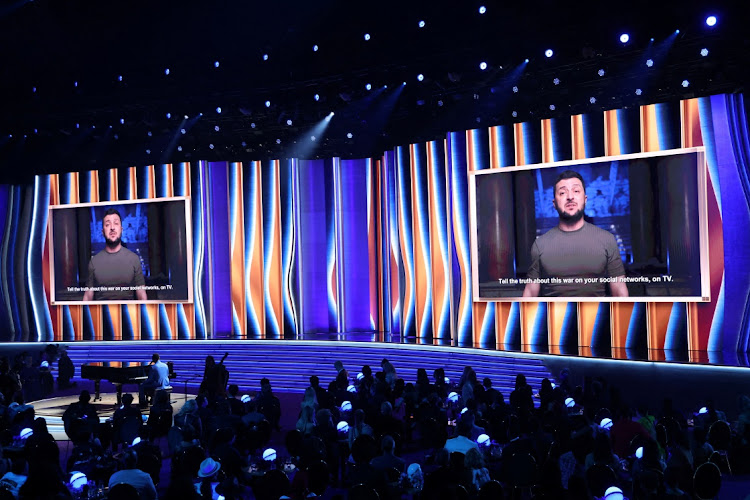 Ukraine's President Volodymyr Zelenskyy addresses the audience of the 64th Annual Grammy Awards show about the invasion of Ukraine by Russia through a video feed as the Grammy show takes place in Las Vegas, Nevada, U.S., April 3, 2022.
Image: REUTERS/Mario Anzuoni

Ukrainian President Volodymyr Zelenskyy on Sunday appeared in a video aired at the Grammy Awards in the United States and appealed to viewers to support Ukrainians "in any way you can."

"What is more opposite to music? The silence of ruined cities and killed people," said Zelenskyy in the video that aired ahead of a performance by American singer John Legend and Ukranian poet Lyuba Yakimchuck.

"Fill the silence with your music. Fill it today, to tell our story. Support us in any way you can. Any, but not silence," Zelenskyy, wearing a dark green t-shirt, said in English, his voice hoarse.

War broke out in Ukraine over a month ago after Russian military forces invaded areas in the country's east, displacing hundreds of thousands of civilians and reducing entire cities to rubble.

Russia calls its actions in Ukraine a "special operation".

Nearly a hundred children have died in the war that followed Russia's invasion of Ukraine, President Volodymyr Zelenskyy told Canadian lawmakers on ...
News
3 months ago
Next Article