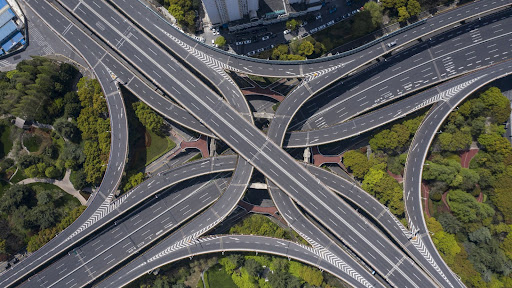 Shanghai’s 25 million residents are almost all under some form of lockdown as the financial hub struggles to contain the coronavirus’s highly contagious omicron variant.
Image: Bloomberg

Shanghai’s 25 million residents are almost all under some form of lockdown as the financial hub struggles to contain the coronavirus’s highly contagious omicron variant.

The eastern half of the mega Chinese city remains under tight movement restrictions despite the end of a four-day sweeping lockdown Friday morning, according to a government statement Saturday. That means the entire population of the metropolis is currently under some form of quarantine as the two-part lockdown shifted to the western half of Shanghai on Friday.

Residents in the western part of the city, where about two-thirds of its population live, began their four-day lockdown at 3am local time on Friday as the program approached an end in the east. During the restrictions, residents are barred from leaving home unless they are going out for mandatory mass Covid-19 tests.

Shanghai has emerged as the epicentre of China’s worst virus outbreak since the early days of the pandemic. The city’s daily infections shot up from less than five at the beginning of March to more than 6,300 Friday, official data showed.

“At present, the epidemic situation is severe and complex, and the task of prevention and control is extremely arduous,” Wu Qianyu, an official at the Shanghai municipal health commission, said at a media briefing Friday.

He said the renewed surge in cases following a brief decline earlier this week is the result of wider Covid-19 screening. Authorities tested more than 14 million people in the western half of the city Friday as part of two-round tests.

The spread of the highly transmissible omicron strain to Shanghai — home to the world’s largest container port and country headquarters of many domestic and overseas companies — is the biggest test yet for President Xi Jinping’s dual goals of eliminating the virus while minimising the economic and social affects of a Covid-19 Zero strategy. The worsening outbreak is further weighing on the world’s second-largest economy and threatening to disrupt global supply chains.

A sub-variant of the highly transmissible Omicron version of coronavirus known as BA.2 is now dominant worldwide, prompting surges in many countries ...
News
3 months ago

While the lockdown of Shanghai’s east officially ended at 5am local time Friday, most residents were not able to leave their homes immediately under what the local government described as a tiered quarantine regime.

People with mild or no symptoms are put under central quarantine for treatment or monitoring at mostly makeshift facilities built in gymnasiums or exhibition centres around the city.

The rules also required anyone living in a building where a Covid-19 case has been reported to stay confined in their home for two weeks. Residents of other buildings in the same compound as the block where a positive patient was reported will be subject to seven-day home quarantine.

Residents living close to locked-down compounds will be confined to their neighbourhood for a week, and limited to sending one person from each household out once a day to fetch necessities delivered to them.

As of Saturday, all of the almost 9 million residents of the eastern half of the city were still subject to some form of restrictions, according to the official statement. Nearly 40% of Saturday’s newly reported infections in the city came from the eastern part, known as Pudong.

Several sources, including the World Health Organisation (WHO), have expressed concern at the spike of Covid-19 infections in China and parts of ...
News
3 months ago

No country met WHO air quality standards in 2021 - data

Not a single country managed to meet the World Health Organization's (WHO) air quality standard in 2021, a survey of pollution data in 6,475 cities ...
News
3 months ago

China reported 1,860 new local symptomatic Covid-19 cases on Tuesday, posting over a thousand for a fourth consecutive day, with most new infections ...
News
3 months ago
Next Article