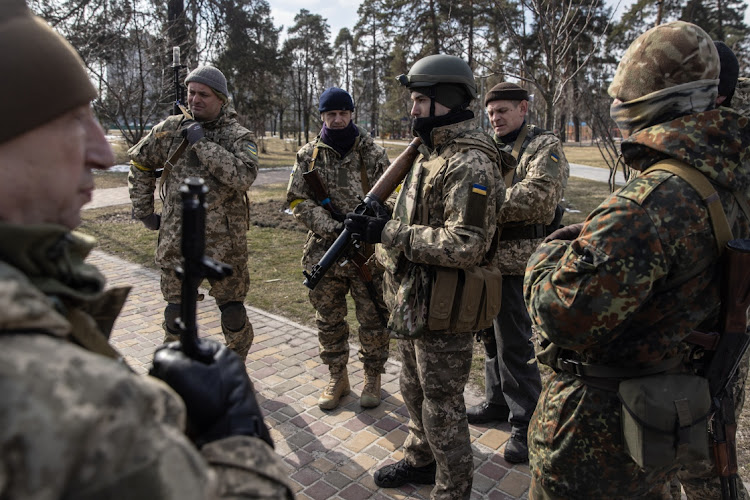 Members of the Territorial Defence Forces learn how to use a weapons during a training session held in a public park on March 09, 2022 in Kyiv, Ukraine. Russia continues assault on Ukraine's major cities, including the capital Kyiv, after launching a large-scale invasion of the country on February 24.
Image: Chris McGrath/Getty Images

Russian forces appeared to be regrouping, possibly for a fresh offensive which could target the capital Kyiv, Ukraine's military and Britian's defence ministry said.

Efforts to isolate Russia economically stepped up, with the US imposing new sanctions on senior Kremlin officials and Russian oligarchs and the European Union set to strip Russia of its privileged trade status on Saturday.

With the Russian assault in its third week, Zelenskyy, who has rallied his people with a series of addresses from the capital Kyiv, said Ukraine had “already reached a strategic turning point”.

“It is impossible to say how many days we still have (ahead of us) to free Ukrainian land. But we can say we will do it,” he said. “We are already moving towards our goal, our victory.”

The US on Friday imposed sanctions on Russian billionaire Viktor Vekselberg, three family members of President Vladimir Putin's spokesperson and lawmakers in the latest punishment for Russia's Feb. 24 invasion.

Ukraine accuses Russia of genocide after bombing of children's hospital

Russia's war in Ukraine entered its third week Thursday with none of its key objectives reached despite thousands of people killed, more than two ...
News
3 months ago

Russian forces kept up their bombardment of cities across the country on Friday in the biggest assault on a European country since World War 2. Satellite images showed them firing artillery as they advanced on Kyiv.

The fighting has created more than 2 million refugees, and thousands of Ukrainians are trapped in besieged cities.

As hundreds sheltered in Kharkiv metro stations, Nastya, a young girl lying on a makeshift bed on the floor of a train carriage, said she had been there for over a week, unable to move around much and ill with a virus.

Putin calls the invasion a “special operation” to disarm Ukraine and unseat leaders it calls neo-Nazis. Ukraine and Western allies call this a baseless pretext for a war of choice that has raised fears of wider conflict in Europe.

The governor of the Kharkiv region on the Russian border, said a psychiatric hospital had been hit, and the mayor of the city of Kharkiv said about 50 schools there had been destroyed.

In the besieged southern city of Mariupol, the city council said at least 1,582 civilians had been killed by Russian shelling and a 12-day blockade that has left hundreds of thousands trapped with no food, water, heat or power.

Russia's defence ministry said the Black Sea port was surrounded, while Ukrainian officials accused Russia of deliberately preventing civilians getting out and humanitarian convoys getting in.

A new effort to evacuate civilians along a humanitarian corridor from Mariupol appeared to have failed, as Ukrainian Deputy Prime Minister Iryna Vereshchuk said Russian shelling prevented them from leaving.

More humanitarian corridors were planned for Saturday, including in the Sumy region in northeast Ukraine, said regional Governor Dmitro Zhivitskiy.

“To save the lives of people, daily and every night hundreds of people work, on the possibility of organising 'Green Corridors',” he said on Facebook. “This is an opportunity to leave the settlements for those who need it the most.”

Biden banned US imports of Russian seafood, alcohol and diamonds. Washington sanctioned more oligarchs and elites, including board members of Russian banks, and a dozen lawmakers.

‘Is this how Madiba would have reacted to Russia’s aggression?’ Ukrainian ambassador asks Ramaphosa

Ukraine ambassador to SA Liubov Abravitova says Russia’s legacy of assistance in the fight against apartheid is being used to turn a blind eye to ...
News
3 months ago

European Union leaders said they were ready to impose harsher sanctions on Russia and might give Ukraine more funds for arms. But they rejected Ukraine's request to join the bloc.

European Commission President Ursula von der Leyen said that the EU would on Saturday suspend Moscow's privileged trade and economic treatment, crack down on its use of cryptoassets, and ban the import of iron and steel goods from Russia, as well as the export of luxury goods in the other direction.

Russia's main force has been stalled north of Kyiv, having failed in what Western analysts say was an initial plan for a lightning assault.

But Britain's defence ministry said Russia appeared to be gearing up for a new offensive in coming days that would probably include Kyiv.

Images taken on Friday and released by private US satellite firm Maxar showed Russian forces were continuing to deploy closer to Kyiv and firing artillery towards residential areas, according to the company's analysis.

Multiple homes and buildings were on fire and widespread damage was seen throughout the town of Moschun, northwest of Kyiv, Maxar said. Reuters could not independently verify the images.

‘SA must intervene, people are being killed in Ukraine’

Vutlhlari Mtonga's eyes lit up as she cast them on her older sister in the arrivals hall at OR Tambo International Airport on Thursday.
News
3 months ago

The Ukrainian general staff said Russian forces were regrouping after taking heavy losses. Ukrainian troops had pushed some back to “unfavourable positions” near the Belarus border, it said.

At a meeting with Belarus President Alexander Lukashenko, Putin said there were “certain positive shifts” in talks with Kyiv, but did not elaborate.

Ukraine has raised the prospect of Moscow's ally Belarus entering the war, accusing Russia of staging “false flag” air attacks on Belarus from Ukraine to provide an excuse. The Kremlin did not respond to a request for comment.

Moscow might not have sufficient troops to achieve its goals, said Mathieu Boulegue, an expert at London's Chatham House think-tank.

“You can't invade a country on a one-on-one ratio” of troops, Boulegue told Reuters. “Nobody has done it, which means that either something was wrong or they had very wrong assumptions.”