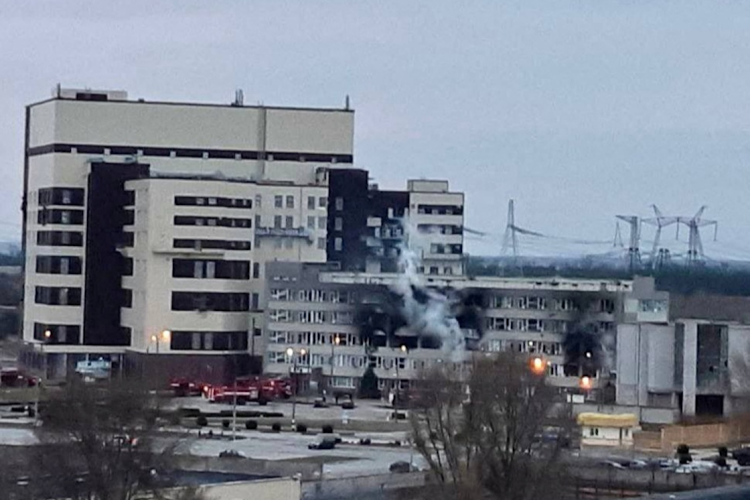 A view shows a damaged administrative building of the Zaporizhzhia nuclear power plant, amid the Russian invasion of Ukraine, in Enerhodar, in the Zaporizhzhia region, in this handout picture released on March 4 2022.
Image: Energoatom/Handout via REUTERS

A building at the Zaporizhzhia nuclear plant was set ablaze during intense fighting, Ukrainian authorities said on Friday, triggering fears of a potential nuclear disaster. The blaze was later extinguished.

“Russian people, I want to appeal to you: how is this possible? After all we fought together in 1986 against the Chernobyl catastrophe,” he said in a televised address, evoking memories of the world's worst nuclear disaster.

Russia's defence ministry blamed the attack at the site on Ukrainian saboteurs, calling it a “monstrous provocation”.

Russian forces that invaded Ukraine last week have already captured the defunct Chernobyl plant north of Kyiv, which spewed radioactive waste over much of Europe after an accident there in April 1986.

Analysts have said the Zaporizhzhia plant is a different and safer type, but Zelenskyy said now was not the time to be silent.

“How can you forget that? And if you have not forgotten, you should not be silent.”

A fire broke out in a training building outside the largest nuclear power plant in Europe during intense fighting between Russian and Ukrainian ...
News
5 months ago

Poland has arrested a Spanish national of Russian origin on suspicion of participating in foreign intelligence activities, the Internal Security ...
News
5 months ago

Talks between Ukraine and Russia have started and the Ukrainian delegation's agenda is to agree an immediate ceasefire and humanitarian corridors to ...
News
5 months ago
Next Article