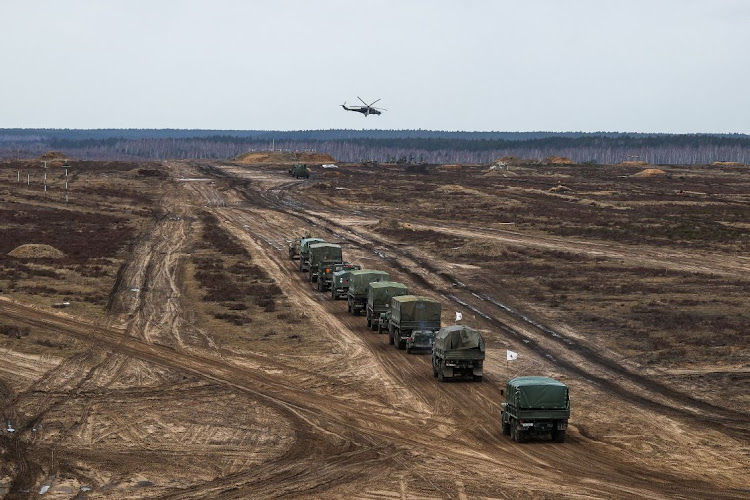 A helicopter flies over troops during the joint military drills of the armed forces of Russia and Belarus at a firing range in the Brest Region, Belarus February 19, 2022.
Image: Vadim Yakubyonok/Belta/Handout via REUTERS

Russia and Belarus are extending military drills that were due to end on Sunday, the Belarus defence minister said, in a step that further intensifies pressure on Ukraine as Western leaders warn of an imminent Russian invasion.

The Belarus minister said the decision had been taken “in connection with the increase in military activity near the external borders” of Russia and Belarus and because of rising tension in the Donbass region of eastern Ukraine.

Nato says Russia has up to 30,000 troops in Belarus and could use them as part of an invasion force to attack Ukraine, though Moscow denies any such intention.

British Prime Minister Boris Johnson said in a BBC interview broadcast on Sunday that Kremlin chief Vladimir Putin might not be thinking logically so the threat of sanctions may not be enough to deter a Russian invasion of Ukraine.

Sanctions “may not be enough to deter an irrational actor and we have to accept at the moment that Vladimir Putin is possibly thinking illogically about this and doesn't see the disaster ahead,” Johnson told the BBC.

Explosions were heard in the centre of Donetsk, a city in the eastern Donbass region controlled by Russia-backed separatists, a Reuters reporter said, in addition to heavy shelling elsewhere in the region earlier in the day. SMS messages sent to residents of Donetsk urged men to report for military duty.

Several days of firing in eastern Ukraine, large parts of which are controlled by Russia-backed separatists, have followed a build-up of Russia troops — estimated by the West to number 150,000 or more — to the north, east and south of the country.

Russia has denied plans to attack Ukraine, despite the troop deployments that Britain's Johnson said suggested preparations for a large-scale conflict.

US Defense Secretary Lloyd Austin on Saturday appeared to compare Russsia's military to a snake that was uncoiling and preparing to strike Ukraine ...
News
5 months ago

“The plan that we are seeing is for something that could be really the biggest war in Europe since 1945 just in terms of sheer scale,” Johnson told the BBC.

Johnson said the US and Britain would seek to cut off Russian companies' access to dollars and pounds in the case of an invasion, saying such sanctions would “hit very very hard” and would go further than previously suggested in public.

With Western fears of war rising, U.S. President Joe Biden was due to convene his top advisers later in the day to discuss the crisis. Biden said on Saturday he believed Russia could launch an attack “at any time,” despite assurances from the Kremlin that some troops were returning to their permanent bases after military exercises.

A Russian diplomat at the UN said no-one should tell Russia where or when to conduct military exercises, adding that US and British intelligence assessments could not be trusted, citing mistakes made prior to the war in Iraq.

Foreign ministers from the G7 group of rich nations said on Saturday they had seen no evidence Russia is reducing its military activity in the area and remained “gravely concerned” about the situation.

Russia ordered the military build-up several months ago while demanding Nato prevent Ukraine from ever joining the alliance. It says Western warnings that it is planning to invade Ukraine are hysterical and dangerous.

However, it has warned of unspecified “military-technical” measures if demands including a Nato pullback from Eastern Europe are not met.

SHELLING IN THE EAST

The focus of tensions in recent days has been on a swathe of eastern Ukraine that Russian-backed rebels seized in 2014, the same year Russia annexed Crimea from Ukraine. More than 14,000 people have been killed in the conflict in the east.

Ukraine suspended operations on Sunday at one of the seven checkpoints to territory in Donbass, due to heavy shelling, the Ukrainian military said.

Incidents of shelling across the line dividing government forces and separatists increased sharply last week, in what the Ukrainian government called a provocation. Kyiv's Western allies are concerned Russia might use the escalation as a pretext for wider conflict.

Local military forces in one of the separatist areas, Luhansk, said on Sunday that two civilians had been killed and five buildings were damaged in shelling by the Ukraine military. Russia's Investigative Committee will investigate the case, the RIA news agency quoted it as saying.

The Ukrainian military said in a statement that its forces were sticking to a ceasefire agreement and “open fire exclusively when the actions of the Russian occupation forces pose a threat to the life and health of Ukrainian servicemen and civilians.”

The military commissariat of the other breakaway region, Donetsk, sent text messages to residents saying: “In view of possible aggression from the Ukrainian side, it is the sacred duty and obligation of every man to take up the defence of his home and fatherland.”