'They were exploiting children': 10 key moments from Ghislaine Maxwell's trial 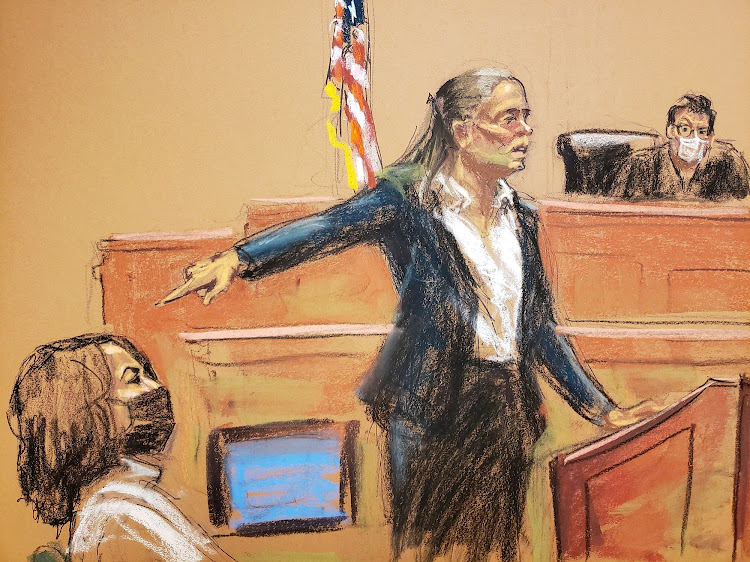 Maurene Comey points at Ghislaine Maxwell as she delivers the rebuttal argument for the government during the trial of Maxwell, the Jeffrey Epstein associate accused of sex trafficking.
Image: Jane Rosenberg/Reuters

Jurors are weighing the fate of Ghislaine Maxwell after a three-week trial featuring testimony from women who said she recruited and groomed them for abuse by the late financier Jeffrey Epstein when they were teenagers.

Maxwell, 59, has pleaded not guilty. Her attorneys say prosecutors are using her as a scapegoat because Epstein, who killed himself while awaiting trial on sex abuse charges, cannot be charged.

HERE ARE 10 KEY MOMENTS FROM THE TRIAL:

• In her opening statement, prosecutor Lara Pomerantz called Maxwell a predator who manipulated girls and groomed them for abuse by Epstein, her employer and onetime boyfriend. Maxwell saw recruiting girls for Epstein to have sex with as a means to maintain a luxurious lifestyle, Pomerantz said.

• Maxwell defense lawyer Bobbi Sternheim began her opening statement by citing the biblical story of Adam and Eve to argue that Maxwell, like many women before her, was being blamed for a man's bad behaviour. Epstein killed himself in 2019 in a Manhattan jail cell.

“Epstein's death left a gaping hole in the pursuit of justice for many of these women,” Sternheim said. “She's filling that hole, and filling that empty chair.”

• A woman known by the pseudonym Jane testified that Epstein first abused her in 1994, when Jane was just 14.

Maxwell sometimes took part in sexual encounters with Jane and Epstein, and acted as if it were normal, Jane testified.

• Under cross-examination by Maxwell attorney Laura Menninger, Jane acknowledged she did not initially tell the FBI everything about Maxwell's involvement. She said later under further questioning by prosecutors that she was not comfortable sharing all the details.

“I was sitting in a room full of strangers and telling them the most shameful, deepest secrets that I'd been carrying around with me my whole life,” she said.

• Prosecutors displayed for the jury a green massage table that was seized from Epstein's Palm Beach, Florida, estate in 2005. Three of the four accusers said they gave Epstein massages that escalated into sexual activity.

Pomerantz called the word massage a “ruse designed to get young girls to touch Epstein.”

• Prosecutors showed the jury images depicting Maxwell's and Epstein's intimate relationship during the 1990s. The never-before-seen digital photographs showed Maxwell kissing Epstein on the cheek or rubbing his bare foot.

• A woman known by her first name, Carolyn, testified that Maxwell once touched Carolyn's breasts and buttocks while Carolyn was nude and told her she had a “great body for Mr. Epstein and his friends.”

“Money will not ever fix what that woman has done to me,” Carolyn said, sobbing on the stand.

• Jeffrey Pagliuca, an attorney for Maxwell, asked Carolyn why she did not mention Maxwell in her initial discussions with law enforcement but implicated her later in a claim to a victim's compensation fund run by Epstein's estate. The questioning was part of Maxwell's efforts to paint the accusers' accounts as unreliable.

“You know that if any information you submitted is false, you can be in criminal trouble?” Pagliuca said, referring to the fund.

• Elizabeth Loftus, a prominent psychologist, testified for the defense that people can confidently recount events that did not happen. Her testimony was part of the defence's effort to argue that the accusers' memories had been manipulated over time.

“When you have post-event suggestion or intervention, people get very confident about their wrong answers,” Loftus testified.

• Minutes before the defense rested its case, Maxwell stood up, and with Sternheim's arm around her lower back, told U.S. District Judge Alison Nathan that she was declining to testify in her own defense.

“Your honour, the government has not proven the case beyond a reasonable doubt, and so there is no need for me to testify,” Maxwell said.

Closing arguments in Ghislaine Maxwell's trial are set to kick off on Monday, before the jury begins to weigh whether the British socialite set up ...
News
1 month ago
Next Article