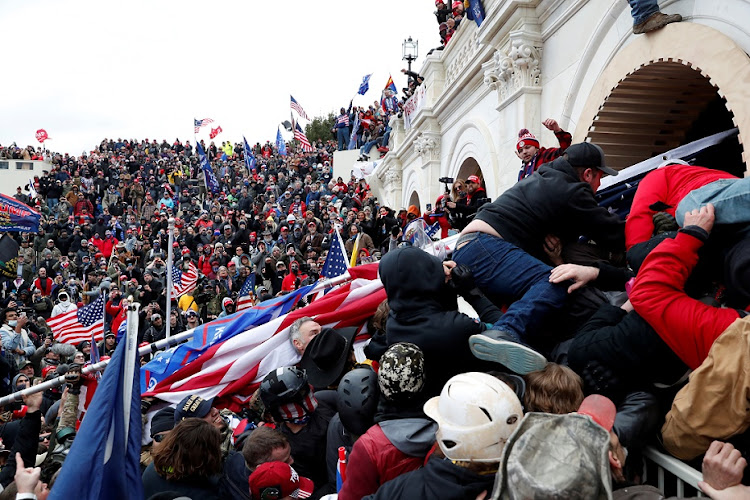 Evan Neumann was seen removing his gas mask and shouting at the police, "I'm willing to die, are you?" before physically assaulting several officers and rushing into them using a barricade as a battering ram.
Image: Reuters/Shannon Stapleton / File photo

A California man charged with assaulting police in the Jan. 6 riot at the U.S. Capitol and using a metal barricade as a battering ram has fled the United States and is believed to have taken refuge in Belarus, federal prosecutors said on Friday.

Evan Neumann, 49, was indicted on Friday on 14 criminal counts stemming from the deadly Capitol siege by supporters of then-President Donald Trump, expanding on charges originally contained in a criminal complaint filed against Neumann in March.

Neumann, of Mill Valley, California, near San Francisco, was seen in video footage donning a gas mask while standing near police in front of barricades set up at the base of the West Front of the Capitol Building, prosecutors said in a statement.

According to documents filed in the case, Neumann later removes his gas mask and shouts at the police, "I'm willing to die, are you?" before he physically assaults several officers and rushes into them using a barricade as a battering ram.

Neumann, who has yet to make a court appearance in the case, fled from the United States on Feb. 16 and "is currently believed to be in Belarus," the U.S. Attorney's Office for the District of Columbia said in a statement.

According to an account published by news outlet the Daily Beast, Neumann was featured last month in a Belarusian state television special titled "Goodbye, America," recounting his journey to the former Soviet republic and its capital, Minsk.

He said on the program that he was seeking political asylum in Belarus because the United States, in his opinion, is no longer a country of law and order, the Daily Beast reported.

Neumann is one of more than 220 individuals charged with assaulting or impeding law enforcement during the Jan. 6 attack on the Capitol, which disrupted a joint session of Congress meeting to formally certify the November 2020 presidential election victory of Democrat Joe Biden over Trump, the Republican incumbent.

Neumann is believed to be the only international fugitive charged in connection with the Capitol riot.

The siege followed a rally near the White House earlier that day in which Trump exhorted supporters to march on the Capitol during a speech in which he repeated false claims that the election was stolen from him through widespread voting fraud.

Four people died the day of the riot, and one Capitol police officer died the next day of injuries sustained while defending Congress. Hundreds of police were injured during the multi-hour melee and four officers have since taken their own lives.

Former President Donald Trump on Monday sued the U.S. congressional committee investigating the Jan. 6 riot at the Capitol, claiming members made an ...
News
9 months ago

Biden says those who refuse to testify in Jan. 6 probe should be prosecuted

U.S. President Joe Biden said on Friday the U.S. Justice Department should prosecute people who defy subpoenas to testify before a congressional ...
News
9 months ago

The U.S. Committee investigating the deadly Jan. 6 riot at the Capitol has subpoenaed four former members of Donald Trump's administration, including ...
News
10 months ago
Next Article