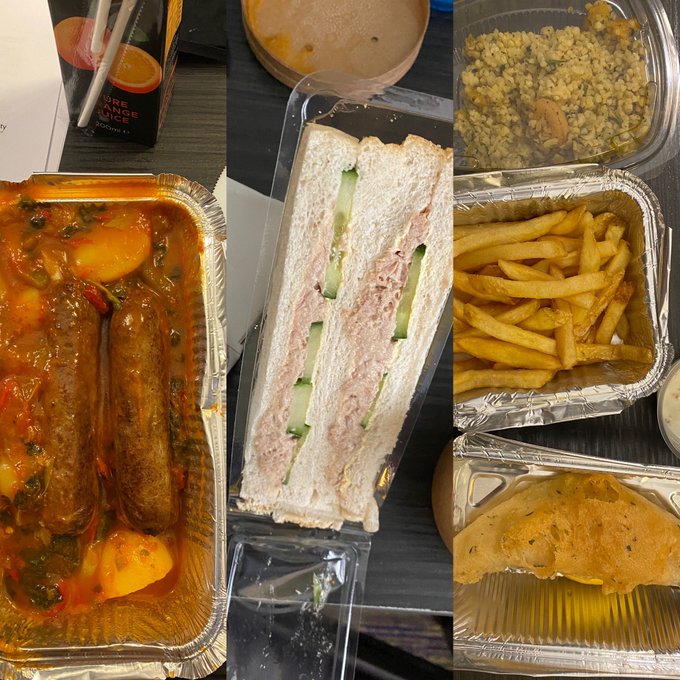 Richard E Grant was not smiling on Saturday after being forced to spend hundreds of pounds on very plain food at a Covid-19 quarantine facility when he returned from visiting his mother in Southern Africa.
Image: Richard E Grant via Instagram/Twitter

Imagine the feast one person could have if they spent more than R4,800 on three meals for a day.

Eswatini-born English actor Richard E Grant was appalled when he paid the equivalent — £228 — for a tuna and cucumber sandwich, two bangers and a tomato-onion mix sauce (in a tinfoil container), chips, couscous, a samoosa (or omelette — one can't tell from the picture) and a juice box at a quarantine hotel at Gatwick in the UK on Saturday.

The actor, best known for his roles in the hit movie Withnail and I and more recently in Star Wars: The Rise of Skywalker and Loki, complained about the meal on his Instagram account.

Grant, 64, is forced to spend the remainder of 10 days at the four-star Holiday Inn after visiting his mother, Leonne Esterhuysen, 90, in Southern Africa when the Omicron variant of the Covid-19 virus was discovered in SA. The ensuing panic saw the region added to the UK government’s red list.

His 204,000 followers were shown a picture of his unappetising meals as he bemoaned what he said was food that would be valued at about £20 (R425) a day.

Afterwards he shared a video of his experience.

“I went to Southern Africa to visit my 90-year-old mother and got caught by the red region, Covid-19 restrictions,” he explained.

“It took over a week — many cancelled flights to finally get home — which I'm incredibly grateful.

“I understand that there are security costs in a hotel and that you've got to pay for two Covid-19 tests — but £228 to receive three meals a day of this very poor standard in a supposed four-star holiday hotel beggars belief.”

More than 750 people commented on the image of the mostly brown and bland-looking food and some 390 people on his video which was watched over 36,000 times within 24 hours.

The comments were mostly in support of Grant, but there were some who called him out for his remarks.

Wittyleak5 said; “It's all a gigantic scam for the disgustingly rich to get even richer.”

Lynn_power wrote: “I understand that these measures are enforced so that the possibility of the new strain of Covid-19 is restricted. I get that. No-one is exempt. But you are quite right. Charging over £200 per day is heartbreaking, especially for those families who may not be able to afford it. Someone is cashing in here.”

Lisamareedom said: “SA is getting punished under 'She who smelt it dealt it' policy of govt's.”

Anti_theist_and_proud wrote: “It's expensive because of the very restrictions you list also apply to everyone else. Say of it as posh nosh.”

Brinkmanka said: “Count your blessings, you were able to see your mother and you were still able to fly back to your country ... the inconveniences and consequences are related to the choices we make ... it's easier to count your blessings than the problems during these times.”

On the image of Grant's food Sacha_church said: “Lots of people on this earth would just like clean water. I'd suck that up if I were you.”

According to the UK's Office for National Statistics £13.80 is the average a person spends a week on eating ou in the UK.

According to an article in TheTimes.co.uk, a spokesperson for the InterContinental Hotels Group, which runs Holiday Inn, referred the publication to the department of health and social care which manages the hotel quarantine programme. A government spokesperson responded that “the majority of passengers who have used the Managed Quarantine Service have been satisfied with the service”.

Meanwhile, for families in SA who were planning to spend the holidays with loved ones overseas, having the country put back on the red list for international travel has left them gutted.

Joy Lloyd, who hasn't seen her Welsh grandchildren for two years, told SowetanLIVE's sister publication TimesLIVE earlier this week that her plans for a family Christmas this year have been scuppered by the Omicron travel ban.

Wilhelmien van Nieuwenhuizen said her bond with grandson Lukas Koorts, 4,  has weakened over time, and their upcoming family holiday has been cancelled.

Sudden travel bans triggered by South Africa’s announcement of the discovery of the Omicron Covid-19 variant have been devastating - and not just in ...
News
6 months ago
Next Article