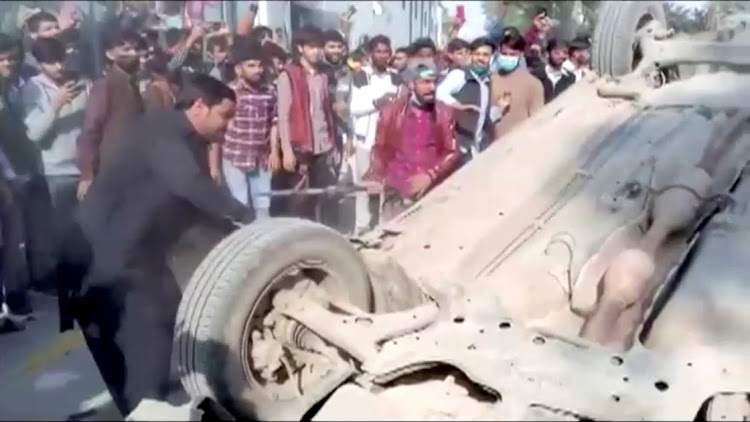 A mob hits an overturned car with sticks after an attack on a factory in Sialkot, Pakistan December 3, 2021, in this screen grab taken from a video.
Image: REUTERS TV

A mob of factory employees in eastern Pakistan tortured and burned a Sri Lankan manager on Friday in a "horrific" attack that Prime Minister Imran Khan said brought shame on the country.

A police official in the eastern town of Sialkot, who spoke on condition of anonymity because of the sensitivity of the case, said investigators believed the attackers had accused the manager of blasphemy for tearing down a poster with Islamic holy verses.

"The factory workers tortured the manager," said provincial government spokesman Hassan Khawar. "A total of 50 people so far have been identified and arrested."

Khan condemned the killing and said he was personally overseeing the investigations and said those guilty would be punished.

"The horrific vigilante attack on a factory in Sialkot and the burning alive of Sri Lankan manager is a day of shame for Pakistan," he said in a message on Twitter.

Television footage showed crowds of hundreds of people in the streets of Sialkot, in the heart of Pakistan's most heavily industrialised region where much of the country's export industry is based.

Mob killings over accusations of blasphemy have been frequent in Muslim-majority Pakistan, where the crime can carry the death sentence.

"It is a barbaric act and against Islam's teaching," he said.

Brutal witch hunts in PNG being linked to jealousy

On a tropical island in Papua New Guinea where most people live in huts, a mob armed with guns, machetes and axes stormed a wooden house by night. ...
News
9 years ago

Rittenhouse, 18, has been charged with killing two protesters and wounding a third with a semi-automatic rifle during unrest in Kenosha, Wisconsin, ...
News
7 months ago

Tied to a tree and sjambokked: Condemnation of mob justice killing