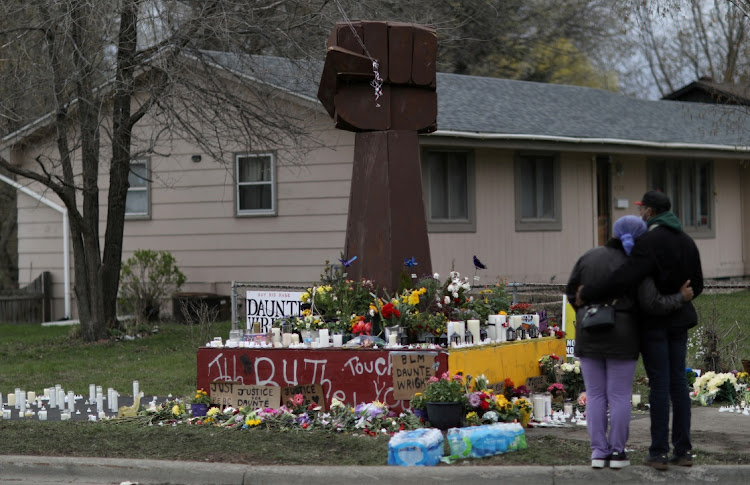 People pay respects to a memorial made from a fist that used to be in George Floyd Square at the site where Daunte Wright was killed by a Brooklyn Center police officer days before in Brooklyn Center, Minnesota on April 14, 2021.
Image: LEAH MILLIS

The former Minnesota police officer charged in the April shooting of Daunte Wright, a Black man whose death prompted new protests against police brutality, will testify in her own defense, her attorney said on Tuesday as jury selection began in the manslaughter trial.

Kimberly Potter, a white former officer in Brooklyn Center just north of Minneapolis, has pleaded not guilty to first- and second-degree manslaughter charges. Her lawyers have said Potter, 49, mistakenly discharged her handgun instead of her stun gun at Wright, 20, during a traffic stop.

Her lawyers also have accused the prosecution of disregarding the conduct of Wright, who they have said resisted arrest and attempted to drive away. Potter, a 26-year veteran of the police force, resigned after the incident.

While questioning a prospective juror, defense attorney Paul Engh said Potter would take the witness stand, a move that lets her tell jurors her side of the story but will expose her to prosecution cross-examination.

"Officer Potter will testify and tell you what she remembers happened. So you will know not just from the video, but from the officers at the scene and Officer Potter herself - what was occurring,” Engh said. "We have something to say here, too."

Two men and two women were selected on Tuesday for the 12-member panel and its two alternates. Hennepin County District Court Judge Regina Chu has said jury selection could take about a week and has set opening statements for Dec. 8.

Prosecutors used one of their three strikes to dismiss a retired fire captain after asking questions about whether he could be impartial toward a fellow first responder. Defense attorneys used one of their five strikes on a woman who once volunteered for the political campaign of Minnesota Attorney General Keith Ellison, who was in the courtroom.

In Minnesota, the maximum sentences for first- and second-degree manslaughter are 15 years and 10 years, respectively.

Jurors in the murder trial of Derek Chauvin began deliberations on Monday after a prosecutor implored them to "believe your eyes" as he replayed ...
News
1 year ago

Wright's shooting occurred only a few miles (km) from the courthouse where Derek Chauvin, a white former Minneapolis police officer, was convicted in April of murder in the death of Floyd, a 46-year-old Black man, during a May 2020 arrest.

Floyd's death sparked demonstrations in many U.S. cities last year against police brutality and racism. Wright's shooting triggered several nights of demonstrations in Brooklyn Center, with many calling the incident another example of police violence against Black Americans.

Wright was pulled over by police because he had an air freshener hanging from his car's rearview mirror and the license-plate tabs had expired. In addition to Potter, two other officers were on the scene as they attempted to detain Wright after finding there was an outstanding warrant for his arrest for a misdemeanor weapons violation.

Potter can be heard on police body-camera video shouting: "I'll tase you," while pointing her handgun at Wright. He was attempting to get back behind the steering wheel after struggling to get away from another officer's grip. Potter then shot Wright in the chest.

Seconds later, Potter said she grabbed the wrong gun, adding: "I'm going to go to prison," according to an amended criminal complaint submitted to the court in September.

Civil rights attorney Benjamin Crump and two other lawyers representing the Wright family issued a statement expressing concern that Potter's attorneys would look to focus the jury on Wright's conduct as the officers sought to arrest him.

"This encounter was a pretextual, unnecessary stop of a young Black man for nothing more than a minor traffic infraction," they said. "We must look past the shameless victim blaming that has been and will be directed towards Daunte."

The former Minnesota police officer charged with manslaughter in the fatal shooting of a young Black man during a traffic stop made her first court ...
News
1 year ago

With calls for police reform and protests across the US, software engineer Bryant Young is hoping to use virtual reality (VR) to fight racism.
News
1 year ago

The white suburban police officer who fatally shot a young Black motorist during a traffic stop in Minnesota, igniting several nights of civil ...
News
1 year ago
Next Article