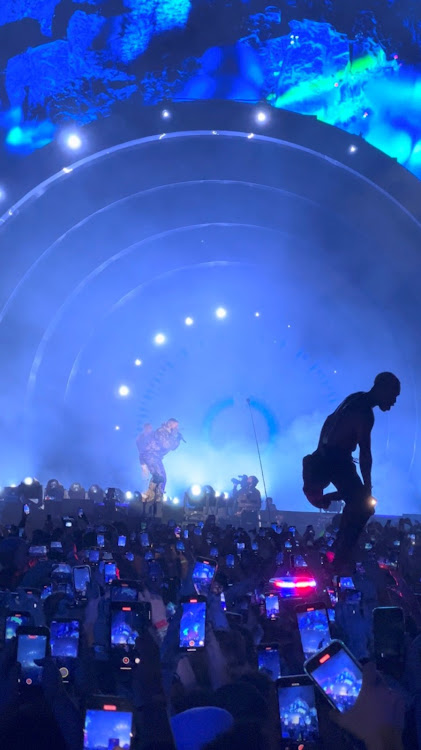 A man jumps on an ambulance standing in the crowd during the Astroworld music festiwal in Houston, Texas, U.S., November 5, 2021 in this still image obtained from a social media video on November 6, 2021.
Image: TWITTER @ONACASELLA via Reuters

At least eight people were killed and many were injured in a crush when fans surged toward the stage during the opening night of the Astroworld music festival on Friday in Houston, officials said.

Peña said that at around 9 p.m. the crowd that had gathered for a performance by popular rapper Travis Scott began to push toward the front of the stage, causing panic and injuries.

People began to fall unconscious, and the mayhem escalated until 9:38 p.m. when a "mass casualty incident" was triggered, he said.

The fire department transported 17 people to hospitals, and 11 of those were in cardiac arrest.

It was not yet clear what caused the disaster.

"I think it's very important that none of us speculate. Nobody has all the answers tonight," Houston Police Chief Troy Finner said. "If you don't have facts, if you don't have evidence, I'm not going to speak against that. We have hurting families out here."

Finner added that the organizers and Scott were both cooperating with police.

Live Nation, the event organizer, and Astroworld did not immediately respond to a request for comment.

"It happened all at once. It seemed like it just happened ... over the course of just a few minutes," said Houston Police Executive Assistant Chief Larry Satterwhite.

"Suddenly we had several people down on the ground, experiencing some type of cardiac arrest or some type of medical episode," he added.

Israel observed a day of mourning on Sunday for 45 people crushed to death at a Jewish religious festival, with flags lowered to half-staff and ...
News
8 months ago

The Houston Chronicle said Scott stopped multiple times during his 75-minute performance when he spotted fans in distress near the front of the stage.

He asked security to make sure they were OK and help them out of the crowd. Emergency vehicles, lights and alarms flashing, cut through the crowds several times.

The fire department said on Twitter that a reunification center had been set up for families who had not heard from loved ones at the festival.

A crowd of 50,000 showed up for the two-day event, Peña said. The second day of the festival has been canceled.

Video clips of the disaster were shared on social media early on Saturday.

In one clip, an ambulance was seen pulling up even as the crowd continued to sway their arms to the music. In another, Scott was seen stopping the concert and addressing the crowd, raising his fist.

Another clip, which Reuters could not immediately verify as authentic, showed police personnel performing CPR on several people even as music blared in the background.

"Tonight’s focus though needs to be on the families and on the lives that we’ve lost. Many of them extremely young, tragically young,” she added.

Houston-born Scott came to fame in the early 2010s for his unique vocal style. Astroworld is also the name of his third studio album released in 2018 to critical acclaim.

He and Kylie Jenner, from the famed Kardashian family, have a daughter.

A stampede killed 19 people and injured 342 at the Love Parade techno music festival in the German city of Duisburg. "The Duisburg prosecutors office ...
News
11 years ago

DUISBURG, GERMANY - THE mayor of Duisburg where 19 people were killed after a stampede at a music festival has been chased away from the scene by ...
News
11 years ago

Another worker hurt at FNB gig

Man recuperates at a Joburg hospital.
News
3 years ago
Next Article