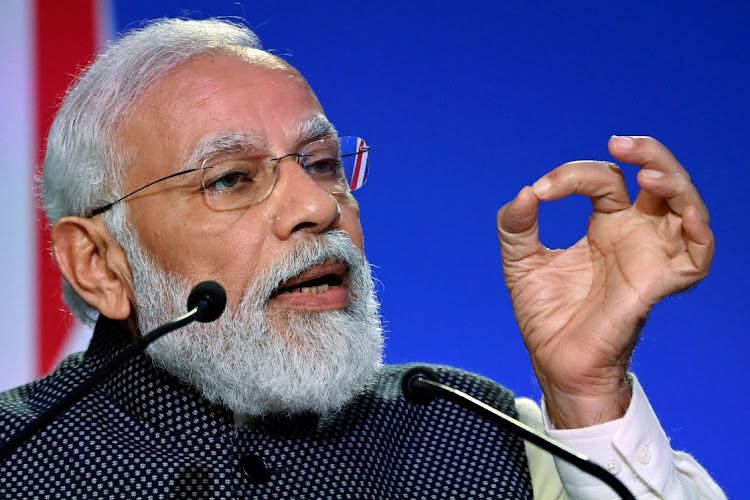 The tax relief comes on the eve of the Hindu festival of Diwali, which marks the beginning of a busy festive season in India, typically marked by increased consumer spending.
Image: Jeff J Mitchell/Pool via REUTERS

The Indian government on Wednesday reduced taxes on petrol and diesel in a bid to improve consumer sentiment, as Asia's third-largest economy recovers from the shocks of severe lockdowns to control the spread of the coronavirus.

Following the federal move, at least ten states ruled by Prime Minister Narendra Modi's Bharatiya Janata Party (BJP), or his allies, said late Wednesday they would go further and reduce local fuel taxes by as much as 7 rupees a litre.

The tax relief comes on the eve of the Hindu festival of Diwali, which marks the beginning of a busy festive season in India, typically marked by increased consumer spending.

Recent months have witnessed a steady growth in consumer spending in India, with a relaxation on curbs on travel and business operations due to a dip in the number of coronavirus cases.

But high fuel prices have been hurting the margins of corporates as well as farmers, who contribute a significant chunk to the economy. The cut in fuel taxes is likely to come as a boost to manufacturers and farmers.

“Given that inflation expectation is building up, there was a need to relook at the tax component,” said N.R. Bhanumurthy, economist and vice-chancellor at the Bengaluru-based B.R Ambedkar School of Economics. “This will cool down the inflation expectation to some extent, which will augur well for sustained GDP (GDP) growth.”

Modi's government has faced increasing criticism from its main opposition Congress party over rising fuel prices in recent weeks. In a country where a majority of the people live on less than $2 a day, taxes make up a large component of fuel prices: a litre of petrol comes at 110.04 rupees while diesel comes at 98.42 rupees in New Delhi.

Before the cut to prices announced on Wednesday, taxes made up about 52% of the price of petrol and about 47% of that of diesel.

Spiking global oil prices have pushed up the retail prices of petrol and diesel to a record high this month in India, which is the world's third-biggest oil importer and consumer and ships in about 85% of its oil needs from overseas.