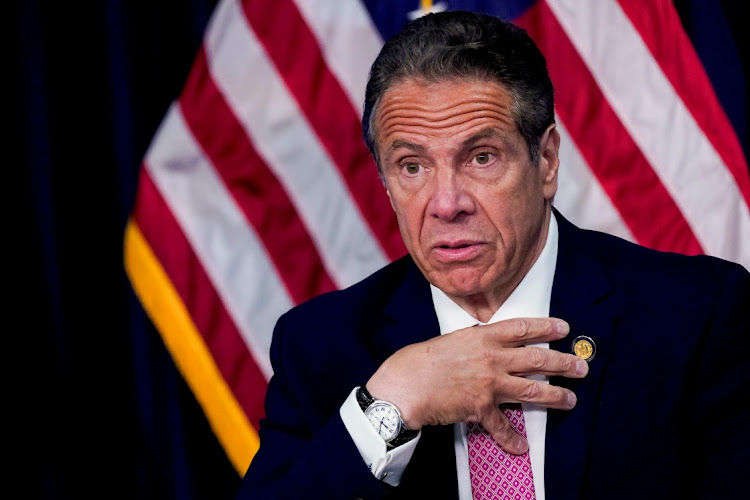 Former New York governor Andrew Cuomo Cuomo, 63, who stepped down two months, is to appear in court on Nov. 17 under a summons issued on Thursday but not yet served, the Albany Times Union newspaper reported.
Image: Mary Altaffer/REUTERS

A criminal complaint charging former New York Governor Andrew Cuomo with a misdemeanor sex offense was filed on Thursday in a court in Albany, the state capital, the first prosecution stemming from a misconduct scandal that led to his resignation.

The filing from the Albany County Sheriff's Office, accusing Cuomo of groping a woman under her blouse, was confirmed by a spokesman for the New York state courts, Lucian Chalfen, in an emailed statement referring to the alleged offense as a "sex crime."

Cuomo, 63, who stepped down two months ago under mounting calls for his ouster from prominent fellow Democrats, including President Joe Biden, is to appear in court on Nov. 17 under a summons issued on Thursday but not yet served, the Albany Times Union newspaper reported.

Cuomo's lawyer, Rita Glavin, said in a statement to local media outlets that he was innocent and questioned Sheriff Craig Apple's handling of the case, saying he "didn't even tell the district attorney what he was doing."

"This is not professional law enforcement; this is politics," she said.

The district attorney for Albany County, David Soares, issued a separate statement suggesting that the sheriff had acted independently of local prosecutors.

"Like the rest of the public, we were surprised to learn today that a criminal complaint was filed in Albany City Court by the Albany County Sheriff's Office against Andrew Cuomo," Soares stated. He declined to comment further.

A copy of the complaint posted online by WNBC-TV in New York said Cuomo engaged in the misdemeanor offense of "forcible touching" on Dec. 7, 2020, at the governor's Executive Mansion by placing "his hand under the blouse shirt of the victim ... and onto her intimate body part."

The complaint goes on to say that Cuomo fondled the woman's breast "for purposes of degrading and gratifying his sexual desires," but the name of the woman has been redacted.

The week prior to his resignation, former gubernatorial staffer Brittany Commisso filed a criminal report with the Albany County Sheriff's Office alleging that the then-governor of groped her breast at the Executive Mansion in Albany late last year.

The New York Post said Cuomo was expected to be arrested next week and charged with a misdemeanor in the alleged groping of a former aide.

It said the anticipated charge resulted from a probe by the district attorney, citing a source briefed on the matter.

Cuomo resigned as governor in August after over 10 years in office, following a probe https://www.reuters.com/world/us/new-york-governor-cuomo-resigns-after-sexual-harassment-findings-2021-08-10 detailed in a 168-page report that found he had sexually harassed 11 women.

New York Attorney General Letitia James said a five-month independent investigation concluded that Cuomo had engaged in conduct that violated multiple federal and state laws. Her office did not pursue criminal charges, but local prosecutors in several counties, including Albany, said after the report's release that they were looking into the matter and requested evidence from the independent inquiry.

"The criminal charges brought today against Mr. Cuomo for forcible touching further validate the findings in our report," James said in a statement on Thursday.

The former governor has long denied wrongdoing, though he has said he accepted "full responsibility" for what he called ill-conceived attempts to be affectionate or humorous.

"In my mind, I've never crossed the line with anyone, but I didn't realize the extent to which the line has been redrawn," he said in announcing his resignation.

Cuomo's exit capped a months-long downfall, derailing the political career of a man once considered a possible U.S. presidential contender, and whose daily briefings early in the COVID-19 pandemic raised his national profile.

Cuomo's resignation spared him from possible removal from office through impeachment proceedings in the state legislature, which appeared likely even though that body is dominated by fellow Democrats.

The independent investigation found that Cuomo groped, kissed or made improperly suggestive comments to women, including current and former government workers, and retaliated against at least one woman who accused him of sexual misconduct.

He was hailed as a national leader last year at the outset of the COVID-19 pandemic after delivering daily news conferences as his state became the U.S. epicenter of the public health crisis.

A senior aide to New York Governor Andrew Cuomo resigned on Sunday in the wake of a state attorney general's report that the governor sexually ...
News
9 months ago

Jennifer Bridges loved her job as a nurse at Houston Methodist Hospital, where she worked for eight years, but she chose to get fired rather than ...
News
7 months ago

The actor and comedian is home from prison after court reverses sexual assault conviction.
S Mag
10 months ago
Next Article