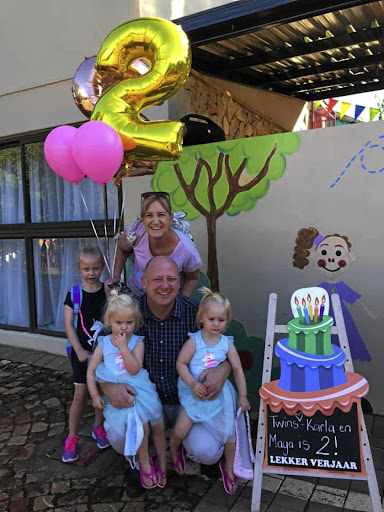 Lauren Dickason with her family when they were celebrating the twins' birthday. With her is her husband Graham, eldest daughter Liane and the twins, Maya and Karla.
Image: Lauren Dickason/Facebook

A mother formerly from Pretoria, who is accused of killing her three daughters in New Zealand, has been referred for further mental observation.

Lauren Dickason was unable to appear in court for a scheduled appearance this week as she remains in custody in a forensic psychiatric ward at Hillmorton Hospital in Christchurch, the New Zealand Herald and TVNZ reported.

Dickason, 40, allegedly killed six-year-old Liané, and two-year-old twins Maya and Karla, in Timaru on September 16, a week after arriving in the town where her surgeon husband Graham had a new job.

At the children's memorial service on September 23, Graham said: “It is a loss that I will carry with me for the rest of my life.”

He urged mourners to “please also pray for my lovely Lauren, as I honestly believe that she is a victim of this tragedy as well”.

While the case is expected to be called again on October 15, the trial is set down to be heard in March next year. No plea has been entered as yet.

“I am shattered. I don’t know what to do but I am shattered‚” said an emotional Maria Mandy Sibanyoni‚ sobbing while she spoke.
News
1 month ago

Lauren Dickason, the SA mother accused of murdering her three young daughters in New Zealand, appeared in court on Saturday.
News
1 month ago
Next Article