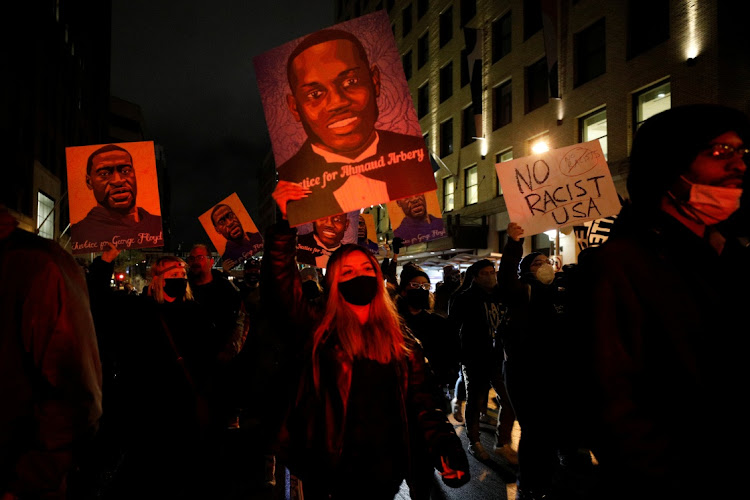 Activists march through downtown on the tenth day in the trial of former police officer Derek Chauvin, who is facing murder charges in the death of George Floyd, in Minneapolis, Minnesota on April 9, 2021.
Image: REUTERS/Nicholas Pfosi

Police in Rochester, New York, said that one officer was served with "departmental charges" in relation to the March 2020 restraint of Daniel Prude, a Black man who died of asphyxiation while in police custody.

The circumstances of Prude's death fueled protests last year against police violence in the United States following other incidents in which police killed Black men and women.

"The Rochester Police Department's Conflict Counsel has determined potential grounds for legal recourse in the case of Officer (Mark) Vaughn, as it relates to the March 23, 2020, incident", the department said in a statement late on Thursday, adding no other officers were charged.

Prude's brother said the charge was the closest thing to justice that he has seen in 18 months, according to an ABC affiliate.

"I don't care what the charges are. You being charged with something. You did something wrong," Joe Prude was quoted as saying.

A formal hearing will be scheduled later, the police department said, adding it supported Vaughn's right to defend himself against the charges.

In March this year, Prude's family charged the city with wrongfully causing his death, failing to properly train its officers and not holding them accountable.

In a lawsuit filed in the U.S. District Court in Rochester this year, the estate of Prude accused officers of causing his death when they restrained him on the ground while he was naked during an apparent mental health crisis.

The officers involved were suspended while the investigation was going on. In February, a grand jury declined to indict any of the officers after an investigation led by state Attorney General Letitia James.

Prude's family had obtained body-worn camera footage of Prude's death that showed him naked in a dark, snowy street. A mesh "spit hood" was placed over his head after he told officers he had contracted the novel coronavirus. The video also shows Prude being restrained against the ground by police.

The footage was released in September last year, fueling nationwide protests against police violence following other high-profile episodes in 2020 where police killed Black men and women, including the death of George Floyd at the hands of Minneapolis police in May last year.

A statue of Confederate commander Robert E. Lee was removed from its base in Richmond, Virginia's capital, early on Wednesday after a yearlong legal ...
News
8 months ago

SA scores above an accepted threshold for the use of force by police, according to researchers.
News
8 months ago
Next Article