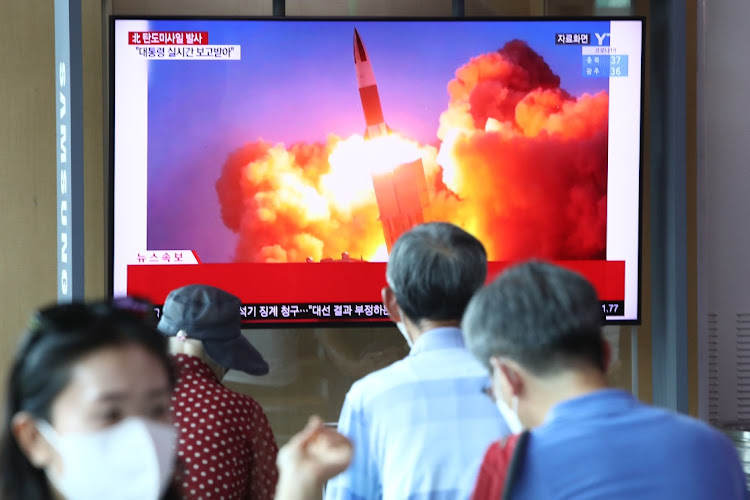 People watch a TV showing a file image of a North Korean missile launch at the Seoul Railway Station on September 15, 2021 in Seoul, South Korea. The unidentified type of missiles were fired from central inland areas of the North on Wednesday afternoon, and the South Korean and the U.S. intelligence authorities are analyzing details for additional information, the JCS said in a release.
Image: Chung Sung-Jun

North Korea fired a pair of ballistic missiles off its east coast on Wednesday, South Korea's military said, ratcheting up regional tension just days after testing a cruise missile that is believed to have nuclear capabilities.

The launches came amid a flurry of activity on the peninsula, including high-level diplomatic talks and South Korea's testing of a newly developed submarine-launched ballistic missile of its own.

North Korea has been steadily developing its weapons systems amid a standoff over talks aimed at dismantling its nuclear and ballistic missile arsenals in return for U.S. sanctions relief. The negotiations, initiated between former U.S. President Donald Trump and North Korean leader Kim Jong Un in 2018, have stalled since 2019.

South Korea's military has raised its level of surveillance, and is maintaining a full readiness posture in close cooperation with the United States, the JCS added.

The U.S. military's Indo-Pacific Command said North Korea's missile launches did not pose an immediate threat to U.S. personnel, territory, or allies, but highlight the destabilising impact of its illicit weapons programme.

Japanese Prime Minister Yoshihide Suga called the missile launch "outrageous" and strongly condemned it as a threat to peace and security in the region.

Both Suga and South Korean President Moon Jae-in would convene sessions of their national security councils to discuss the launches, their offices said.

North Korea has plenty of military firepower even if its threat this week of a pre-emptive nuclear strike on the United States is a hollow one, with ...
News
9 years ago

Both Koreas have been developing a range of new missiles and other weapons, but North Korea's ballistic missile systems have been banned by U.N. Security Council resolutions.

In November 2017, North Korea tested an intercontinental ballistic missile capable of reaching the entire United States and declared it had become a nuclear power. It has since focused mainly on testing shorter-range missile and rockets.

Analysts say shorter-range missiles are designed to play a major role in the event of a war by evading missile defences to strike targets in South Korea and Japan.

North Korea this year declared it was seeking to miniaturise nuclear warheads, which could potentially be fitted to tactical missiles.

U.S. President Barack Obama said on Friday any provocative actions by North Korea would have "serious consequences" after the reclusive North ...
News
5 years ago

The latest launch came as foreign ministers of South Korea and China held talks in Seoul amid concern over North Korea's tests and the stalled denuclearisation negotiations between Pyongyang and Washington.

North Korea said it successfully tested a new long-range cruise missile last weekend, calling it "a strategic weapon of great significance". Analysts say that weapon could be its first cruise missile with a nuclear capability.

Chinese Foreign Minister Wang Yi, when asked about the earlier cruise missile tests, said all parties should work to promote peace and stability on the Korean peninsula.

"Not only North Korea but other countries are carrying out military activity," he told reporters. "All of us should make efforts in a way that helps resume dialogue."

In a meeting with Wang on Wednesday, Moon asked for China's support to restart dialogue, saying North Korea had not been responding to offers from South Korea and the United States for talks or engagement such as humanitarian aid, Moon's spokesperson said.

The nuclear envoys of South Korea, Japan, and the United States were meeting in Tokyo this week as well.

U.S. envoy for North Korea, Sung Kim, said on Tuesday the United States has no hostile intent towards North Korea and hoped it would respond positively to offers for talks on its weapons programmes.

The United States wants North Korea to give up its nuclear and missile programmes in exchange for sanctions relief. North Korea has refused.

President Barack Obama urged North Korea to end its "belligerent approach," as US officials sought to play down a leaked intelligence report ...
News
9 years ago

After weeks of intense speculation about the health of Kim Jong Un, state news agency KCNA said on Saturday the North Korean leader attended the ...
News
2 years ago

North Korea compares Obama to a monkey in hacking row

North Korea has compared President Barack Obama to a monkey and blamed the U.S. for shutting down its Internet amid the hacking row over the movie ...
News
7 years ago
Next Article