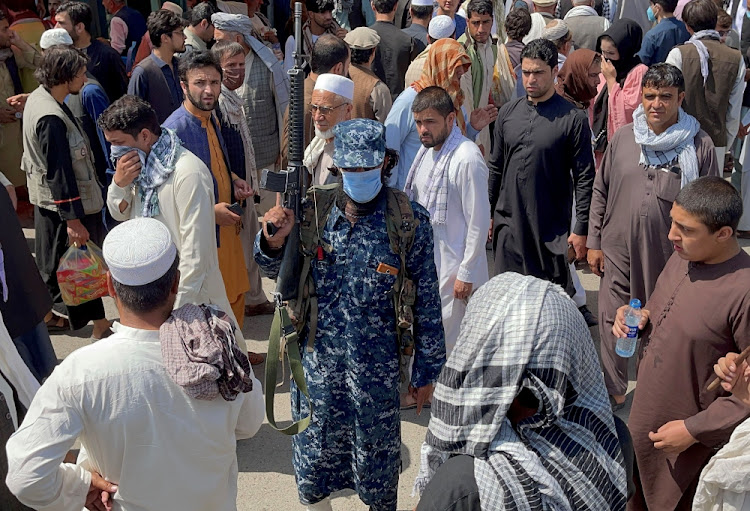 A member of Taliban security forces stands guard among crowds of people walking past in a street in Kabul, Afghanistan September 4 2021.
Image: REUTERS/Stringer

The Taliban said on Sunday their forces had fought their way into the provincial capital of Panjshir, the valley where opposition forces have been holding out since the fall of Kabul three weeks ago.

The police headquarters and district centre of Rukhah, adjacent to the provincial capital Bazarak, had fallen, and opposition forces had suffered numerous casualties, with large numbers of prisoners and captured vehicles, weapons and ammunition, Taliban spokesperson Bilal Karimi said on Twitter.

Fighting was under way in Bazarak, he said. It was not possible to confirm the report, which was echoed on other Taliban Twitter accounts.

“The resistance forces are ready to continue their defence against any form of aggression,” he said.

On Saturday, Italian aid group Emergency said Taliban fighters had reached the trauma hospital it operates in Anabah district, within the Panjshir valley.

Taliban and opposition forces battled on Saturday to control the Panjshir Valley north of Kabul, the last Afghan province holding out against the ...
News
11 months ago

Taliban officials have said previously their forces had secured full control of Panjshir but fighting has been continuing for days, with each side saying it had inflicted large numbers of casualties.

Ahmad Massoud, leader of the NRFA, has pledged to continue resisting the offensive and has called for international support.

Panjshir, a rugged mountainous valley north of Kabul still littered with the wreckage of destroyed Soviet tanks, has proved very difficult to overcome in the past. Under Massoud's late father, Ahmad Shah Massoud, it resisted both the invading Soviet army and the previous Taliban government.

On Sunday, Massoud said hundreds of Taliban fighters had surrendered to NRFA forces, which included remnants of regular Afghan army and special forces units as well as local militia fighters. It was not possible to confirm that independently.

The Panjshir fighting has been the most prominent example of resistance to the Taliban, whose forces swept into Kabul on August 15 as the Western-backed government collapsed and President Ashraf Ghani fled the country.

But small individual protests for women's rights or in defence of the green, red and black tricolour flag of Afghanistan have also been held in different cities.

Massoud originally called for a negotiated settlement with the Taliban and several attempts at talks were held but they eventually broke down, with each side blaming the other for their failure.