All-female orchestra was a symbol of change in Afghanistan 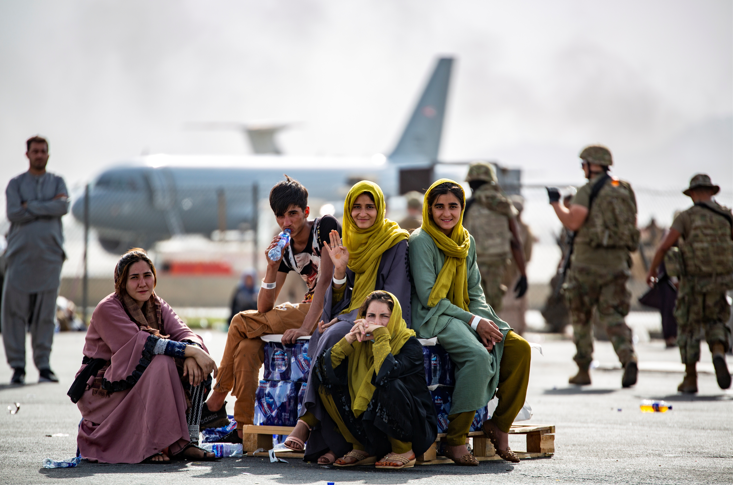 Crowds have grown at the airport in the heat and dust of the day over the past week, hindering operations as the United States and other nations attempt to evacuate thousands of their diplomats and civilians as well as numerous Afghans. An all-women ochestra has disbanded after the Taliban took over.

Negin Khpalwak was sitting at her home in Kabul when she got word that the Taliban had reached the outskirts of the capital.

The 24-year old conductor, once the face of Afghanistan's renowned all-female orchestra, immediately began to panic.

The last time the Islamist militants were in power, they banned music and women were not allowed to work. In the final months of their insurgency, they carried out targeted attacks on those they said had betrayed their vision of Islamic rule.

Dashing around the room, Khpalwak grabbed a robe to cover her bare arms and hid away a small set of decorative drums. Then she gathered up photographs and press clippings of her famed musical performances, put them in a pile and burnt them.

"I felt so awful, it felt like that whole memory of my life was turned into ashes," said Khpalwak, who fled to the United States - one of tens of thousands who escaped abroad after the Taliban's lightning conquest of Afghanistan.

The story of the orchestra in the days following the Taliban's victory, which Reuters has pieced together through interviews with members of Khpalwak's music school, encapsulates the sense of shock felt by young Afghans like Khpalwak, particularly women.

The orchestra, called Zohra after the Persian goddess of music, was mainly made up of girls and women from a Kabul orphanage aged between 13 and 20.

Formed in 2014, it became a global symbol of the freedom many Afghans began to enjoy in the 20 years since the Taliban last ruled, despite the hostility and threats it continued to face from some in the deeply conservative Muslim country.

Wearing bright red hijabs, and playing a mix of traditional Afghan music and Western classics with local instruments like the guitar-like rabab, the group entertained audiences from the Sydney Opera House to the World Economic Forum in Davos.

Today, armed Taliban guard the shuttered Afghanistan National Institute of Music (ANIM) where the group once practised, while in some parts of the country the movement has ordered radio stations to stop playing music.

Crowds seeking to flee Afghanistan gathered on its borders while long queues formed at banks on Wednesday, as an administrative vacuum after the ...
News
11 months ago

"We never expected that Afghanistan will be returning to the stone age," said ANIM's founder Ahmad Sarmast, adding that Zohra orchestra represented freedom and female empowerment in Afghanistan and its members served as "cultural diplomats".

Sarmast, who was speaking from Australia, told Reuters the Taliban had barred staff from entering the institute.

"The girls of Zohra orchestra, and other orchestras and ensembles of the school, are fearful about their life and they are in hiding," he said.

A Taliban spokesman did not immediately respond to questions about the status of the institute.

Since returning to power as the final Western soldiers withdrew from the country, the Taliban have sought to reassure Afghans and the outside world about the rights they would allow.

The group has said cultural activities as well as jobs and education for women would be permitted, within the confines of sharia and Afghanistan's Islamic and cultural practices.

While Khpalwak frantically burned her musical memories on Aug. 15, the day the Taliban marched into Kabul without a fight, some of her peers were attending a practice at ANIM, preparing for a big international tour in October.

At 10 a.m., the school's security guards rushed into the rehearsal room to tell the musicians that the Taliban were closing in. In their haste to escape, many left behind instruments too heavy and conspicuous to carry on the streets of the capital, according to Sarmast.

Sarmast, who was in Australia at the time, said he received many messages from students worried about their safety and asking for help. His staff told him not to return to the country because the Taliban were looking for him and his home had been raided several times.

The dangers facing performers in Afghanistan were brutally highlighted in 2014, when a suicide bomber blew himself up during a show at a French-run school in Kabul, wounding Sarmast who was in the audience.

At the time, Taliban insurgents claimed the attack and said the play, a condemnation of suicide bombings, was an insult to "Islamic values".

Even during 20 years of a Western-backed government in Kabul, which tolerated greater civil liberties than the Taliban, there was resistance to the idea of an all-female orchestra.

Zohra orchestra members have previously spoken about having to hide their music from conservative families and being verbally abused and threatened with beatings. There were even objections among young Afghans.

Khpalwak recalled one incident in Kabul when a group of boys stood attentively watching one of their performances.

Western forces running the Afghan airlift braced on Saturday for more attacks after the United States launched a drone strike, apparently killing an ...
News
11 months ago

US forces helping to evacuate Afghans desperate to flee Taliban rule were on alert for more attacks on Friday after at least one Islamic State ...
News
11 months ago

As she was packing up, she overheard them talking amongst themselves. "What a shame these girls are playing music", "how have their families allowed them?", "girls should be at home", she recalled them saying.

Life under the Taliban could be much worse than whispered jibes, said Nazira Wali, a 21-year-old former Zohra cellist.

Wali, who was studying in the United States when the Taliban retook Kabul, said she was in touch with orchestra members back home who were so fearful of being found that they had smashed their instruments and were deleting social media profiles.

"My heart is trembling in fear for them, because now that the Taliban are there we can't predict what will happen to them within the next moment," she said.

"If things continue as they are, there will be no music in Afghanistan."

Reuters reached out to several orchestra members left in Kabul for this story. None responded.

Khpalwak managed to escape from Kabul a few days after the Taliban arrived, boarding an evacuation flight alongside a group of female Afghan journalists.

Tens of thousands of people flocked to Kabul's airport to try and flee the country, storming the runway and in some cases clutching on to the outside of departing planes. Several died in the chaos.

Khpalwak is too young to fully remember life under the Taliban's previous rule, but arriving in the capital as a young girl to attend school sticks in her memory.

"All I saw was ruins, downed houses, holes in bullet-ridden walls. That's what I remember. And that's the image that comes to mind now when I hear the name of the Taliban," she said.

In the music school she found solace, and among her Zohra orchestra bandmates "girls closer than family".

"There wasn't a single day that was a bad day there, because there was always music, it was full of colour and beautiful voices. But now there is silence. Nothing is happening there."

The Taliban has declared amnesty and vowed to uphold women’s rights.
News
11 months ago

WATCH | ‘The world abandoned us’: What’s happening in Afghanistan explained

Two decades after they were removed by the US military the Taliban marched into Kabul on Sunday and seized power again in Afghanistan.
News
11 months ago
Next Article