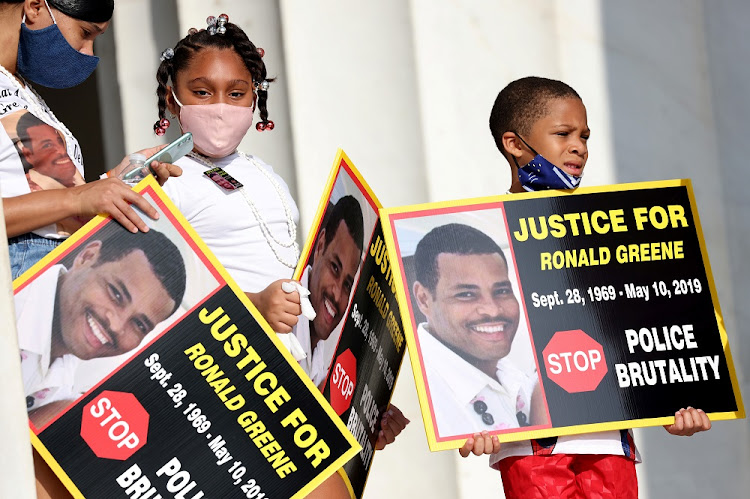 Family members of Ronald Greene listen to speakers as they gather at the Lincoln Memorial during the 'Get Your Knee Off Our Necks' march in support of racial justice in Washington, US, on August 28 2020.
Image: Michael M. Santiago/REUTERS

The Louisiana State Police unit involved in the deadly May 2019 arrest of Ronald Greene is under investigation over whether its officers are systematically targeting black motorists for abuse, AP reported on Wednesday.

The unit is being investigated by a secret internal panel that was set up in response to the death of Greene, 49, and three other cases of stopping black men, the agency reported, citing four people familiar with the panel's existence.

Louisiana State Police did not immediately respond to a Reuters request for comment.

The seven-member panel investigating the unit has begun to review thousands of bodycam videos from the past two years involving a dozen troopers, at least four of whom were involved in Greene's arrest, the report said. No troopers have been charged in Greene's arrest.

It added that investigators were looking for signs of excessive force, examining whether troopers showed racist tendencies and whether they were hiding evidence.

Greene's death further fuelled a national debate over police brutality, especially against black men, after a police bodycam video showed officers punching and dragging him. One officer shocked him with a stun gun.

Footage also showed Greene leading police on a high-speed chase, then crashing his car. An autopsy showed that he had alcohol and cocaine in his system and suffered multiple injuries from the crash as well as injuries from a physical struggle.

An 18-year-old London man was charged with conspiracy to murder in connection with the shooting of Black Lives Matter activist Sasha Johnson, who ...
News
7 months ago

Former Minneapolis police officer Derek Chauvin asked a judge on Wednesday for probation after being convicted for the murder of George Floyd, while ...
News
7 months ago
Next Article