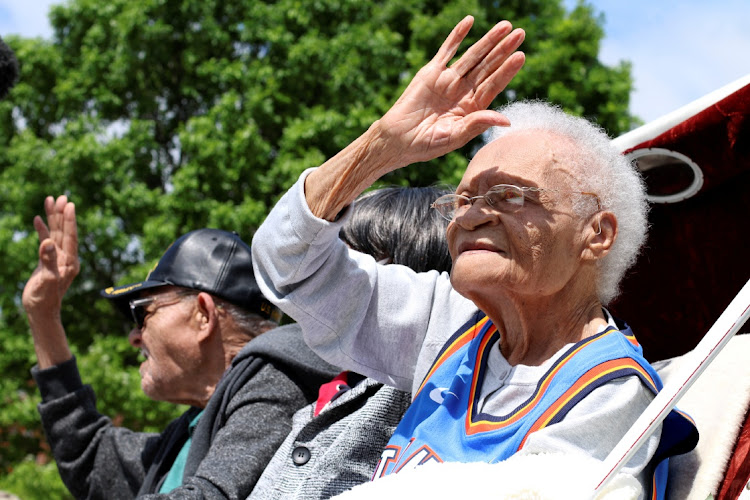 Once a week, every week, Rev. Robert Turner leaves his Vernon AME Church to march the mile to City Hall.

Turner has been marching for years to demand reparations. His church is one of more than 1,200 buildings that were torched by white mobs in the 1921 massacre in the Greenwood district, where an estimated 300 people died, thousands were made homeless and an entire African-American community - Tulsa's prosperous "Black Wall Street" - was destroyed.

A marker on a front corner of the church's brick structure notes that its basement "is the only edifice remaining from the worst race massacre in American history."

Viola Fletcher, one of three centenarian survivors of the attack, testified in the U.S. Congress earlier this month.

"I am 107 years old and I have never seen justice. I pray that one day I will," Fletcher said.

As Tulsans prepare to mark the May 31-June 1 centennial of the massacre, they have heard broader conversations about reparations for Black Americans at the federal level and locally in communities such as Evanston, Illinois. Some Tulsans say the national conversation has been encouraging.

Marikana a reminder that black lives must matter

There's a history of violence against blacks
Opinion
3 years ago

"I've been an advocate for reparations all my life, but once I came to Vernon as the pastor here in 2017 and learned about the history of this church ... I was moved to my soul to take some direct action," Turner said, sitting in the church's sanctuary.

A commission created by the state of Oklahoma called in a 2001 report for direct payments to survivors of the massacre and their descendants, the creation of a scholarship fund for affected students and the establishment of an economic development enterprise zone in historic Greenwood.

None of those recommendations were implemented, said Phil Armstrong, the project director of a commission formed to commemorate the centennial. Asked why not, he said: "Politics. We're in Oklahoma. It is a very, very conservative state."

But Armstrong was encouraged by events outside the state.

"I think we're seeing a huge tide shift," he said. "I think 20 years ago, very, very few people had the appetite for when someone would say the name reparations. But history has talked."

Poet, author, activist and philanthropist Maya Angelou was loved by many and just like many she had her fair share of heartbreaks. Maya Angelou died ...
News
8 years ago

Lawmakers in Washington have again introduced a bill that calls for a study of slavery and discrimination in the United States and recommendations for remedies. The White House has said President Joe Biden supports the efforts.

Schools such as Georgetown University and Virginia Theological Seminary have pledged to offer funds to descendants of the slaves that built them or were sold to finance them.

And earlier this year, Evanston, Illinois, approved a plan to distribute grants to Black residents in a gesture toward addressing historically racist housing policies.

"There's definitely a lot of motivation and definitely a lot of momentum," said Rashawn Ray, a Brookings Institution fellow and sociology professor at the University of Maryland, College Park. "People are recognizing that if we're going to get past our racial wrongs, that we have to atone for the past."

In February, survivors and descendants filed the latest of three lawsuits seeking a variety of remedies, including the creation of a victim's compensation fund.

Previous attempts to seek justice in the courts failed to yield wins, but Turner thinks this one has a better chance as it is framed as a public nuisance lawsuit, citing ongoing harm.

"It shouldn't have to take a lawsuit for us to get our repair. It should be something as citizens we are given because we are citizens of this city, this state and this nation," said Turner, whose church is one of the parties to the suit.

A spokeswoman for Tulsa's mayor's office declined to comment, citing the ongoing litigation, in which the city is named as a defendant. Spokespeople for the Oklahoma governor's office did not respond to repeated requests for comment.

Henry Johnson, a U.S. congressman from Georgia, introduced a bill earlier this month that would allow victims of the Tulsa massacre to file court claims without contending with statutes of limitations, after a federal judge ruled a previous lawsuit was filed too late.

Michelle Place, the executive director of the Tulsa Historical Society and Museum and a member of the centennial commemoration commission, said reparations for the survivors of the massacre remained a thorny question.

"What amount is there that is not an insult to those three people for what they've lost?" she said.

A Georgia prosecutor said on Tuesday she would seek the death penalty for the man accused of fatally shooting eight people at Atlanta-area spas, six ...
News
1 year ago

Boyfriend kills 6 people and himself at Colorado birthday party; children not shot

A man fatally shot six people including his girlfriend before turning the gun on himself early on Sunday at a birthday party in Colorado Springs, ...
News
1 year ago

Terrorists should not be allowed to purchase or possess firearms: NRA

America’s National Rifle Association (NRA) has come out in support of regulations to prevent people on terror watch lists from buying guns. Their ...
News
6 years ago
Next Article